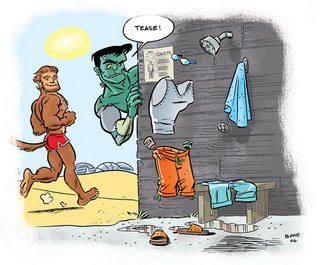 It's SUMMER!! I've already been to Toronto's beach a few times (I think I got a little sunstroked)!

I really wanted to do a joke with the Invisible Man because 1. he's one of my favourite Universal film characters and b. I could full frontal nudity and not be embarrassed!!! There you go! The other Monster Beaches can be found here, here and here. I hope you guys are having a great summer!

Oh yeah, I actually really wanted to put up a drawing of Superman because he's the big hero of the week! I saw the movie and really quite liked it. If they do a sequel (and there's talk) I'd love to see them do Bizarro! Even if it's a subplot I think a Superfight with Bizarro would be awesome! And Bryan Singer must continue to direct.

I love that series. Fun and sexy.
You should do strips with your version of the Monsters.

Francois, I'd love to do exactly that. I picture it like an Archies type of comic with the fun adventures of beach loving monsters.

I favour Frank as the leader and definitely like drawing the Wolf Man! :)

"I favour Frank as the leader and definitely like drawing the Wolf Man! :)"

Francois - A FURRY?!? You take that back!! :)
(Although it would seem to be the case, wouldn't it...I guess I won't post that picture of Myles as the Vivisector...)

I was pleasantly surprised by "Superman Returns" as well, i question some of their choices but overall it was a lot of fun. Singer certainly has a way with those superhero pictures...I wonder how he would handle Bizarro?...

Oh, and I love that arm on Frankenstein -- yum.

That was my répartie of the day.

Hey! It took some serious digging before I found these comics. Someone had sent to a random group and I love them, especially Wolfman. Can you please let me know if you'll be doing more? I would so love a comic series with these characters!

Email me at griffiewolf@gmail.com and thanks so much for this fantastic comic!