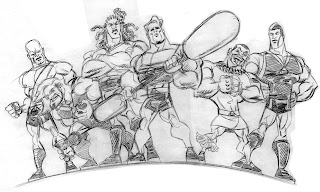 That's right...I watch and love the American Gladiators! Ever since the premier episode I've wanted to sit down and draw the line-up of the new series (I'll get to the girls eventually). Finally, with my work all caught up I could spend a few hours sketching out TV's newest superheroes!

I used to watch the original series back in the late 80's. Obviously the beefcake was a draw but I know I always thought of the show more as cartoon superheroes than as a sport like wrestling(which I just never got into, even though it was also a bunch of cartoon characters at that time). So I can honestly say I was pretty darned excited that a new American Gladiators was coming to television.

Fellow blogger Super Underwear Pervert (or "SUP") wrote a hilarious drunken review of the first episode at his blog here: http://superunderwearperverts.blogspot.com/2008/01/drunken-american-gladiators-review.html
Oh, and the Gladiators are, from left to right, Militia, Wolf, Mayhem, Titan, Toa, and Justice. If you haven't watched the show I highly recommend it! The Eliminator alone is reason enough. It's both hilarious and thrilling when the competitors go head to head in that ridiculous blue and red obstacle course. I love it!

Please, for the love of God, color this. It'd make an awesome desktop wallpaper. :-)

Jon - Inks and colours on the way, naturally! I'll try to make it Desktoppable as well.

I was a HUGE fan of the original series. I've only watched a couple of the new series. But for some reason I'm not as attracted to the show as I thought I would be?