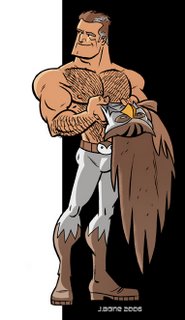 Allow me to reminisce for a moment, won't you. One of the first comic books I remember was an issue of Superman my dad had in a stack of comics and magazines. The pile was mostly DC thinking back on it now...Batman, maybe a horror comic or two. In the Superman comic there was a panel with Superman removing his shirt to reveal a metal chest plate over his pecs. I was probably too young to read because I don't remember any other part of the story and it led me to believe that Superman was only bulletproof in one area.

I used to look at that panel all the time. Sometimes I was trying to figure out why he had a metal plate on his chest, sometimes mentally removing that chest plate and imagining a glowing kryptonite heart underneath or just an empty cavity. I thought it was embedded in his chest and he would die if it was removed. Mostly I'm pretty sure I kept looking at that panel because it was one of the first times I'd seen a man with his shirt off!

When you grow up in a small town where pin-up girls are a regular sight in your dad's workshop you take your thrills where you can get them, folks.

The hero above is some kind of Owl type guy. I think the Owl is taken by the Watchmen. For now he's just a character I like doodling.