Before there was Jett Vector there was -- ROGER RODGERS!

Back in, oh, 1999, I created a comic book called Solar Stella (for which I was nominated for an Eisner, I'll have you know :) It was all pin-up girl art and cheesy fun. The middle of the book was all activities pages and a paper doll of Stella.

A year or two later I started the second Solar Stella book where I introduced another pin-up space girl, Ta'Li Ho, and her beefy sidekick, Roger Rodgers.

I never finished book two. But in the course of working on it I really fell in love with Roger and Ta'Li. Especially Roger. He was my loveable lunk headed character whom I could throw into situations where he might accidently become undressed...in a book that was mainly pin-up girly art! 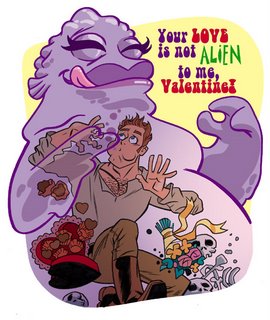 Even more years later I actually drew a thirteen page adventure with Ta'Li and Roger...which has yet to see print. Along the way I've drawn a bunch of pin-ups with the characters and today I'm sharing just a few of them. I know there are more but searching all of my back up discs takes time. 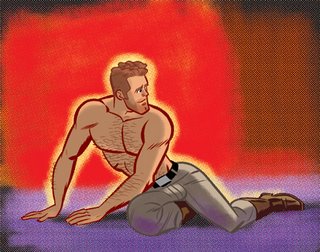 This last one maybe needs a little explanation. I'd just found the pastel brush tool in Photoshop and had to try it out all artsy-fartsy like. I may have referenced a photo for the drawing and from the look of the pose it was a picture of a woman! But there's still something nice and innocent about Roger that I really like in this.

Daily work has been keeping me from producing newer stuff but I've still got disc-loads of older drawings to share. And, as usual, check the links to the right for great art and pictures.

Wow, I really love Roger Rodgers! He's got that perfect mix of sweet and sexy.

Wonderful.
Manly and sweet, what an irresistible combination.

Cutie. But I still cast my vote for Jett. :) Jett seems a bit more... cocksure.

Wow, that's a great character design. Appealing and hunky. I'd love to see him in a comic sometime.

Greg - In the future there are no more sexual boundaries!

Seahank - Thanks. You'll definitely be seeing more of Roger soon (there's a paper doll page of Roger in my files ...and there's no underwear in the future, either!)

Andrew - Jett is most assuredly "cocksure"! :)

Dorian - Thanks, as well. I'll put up a few of the pages from the comic started a while ago. I've also got pencils from the Solar Stella book where Roger is introduced.

very nice! i always like to see replays of guys in those pin-up poses. naked and vulnerable at the feet of the hero (or heroine) with the big sword/gun. or wrapped up in alien tentacles getting their spacesuit torn off.
pant pant!
i want to see what "tally the ho" looks like!
maybe Roger would make a nice sidekick for Jett!
why hasn't it seen print yet? why not self-publish it thru lulu.com?

hey nice blog, strong sihouettes, and i like the designs. will be back

Stan - Lulu.com sounds like a great place to go. I'm considering putting together a sketchbook and publishing through Lulu. And it's funny you should mention alien tentacles...I have a drawing of Roger in the arms of a curious, lecherous alien. Have you been going through my things?

Chris - Thanks. I'm envious of your Space Commander status as occupation. I, myself, am a mere chronicler of other's space adventures!

Klahd - We all must do our parts to keep the lunkheads as undressed as possible.

Oh, a sketchbook would be a great idea.
I've bought a few other skechbooks published through Lulu, and they looked good.