I'm a little late for Canada Day but I hope you guys won't mind me posting a few drawings of our famousest of superheroes. I wasn't a fan of Wolverine at all as a kid or a teen...not until Hugh Jackman did his thing in the movies did I ever even pay any attention to the character. And yet I didn't draw the Hugh Jackman Wolverine. 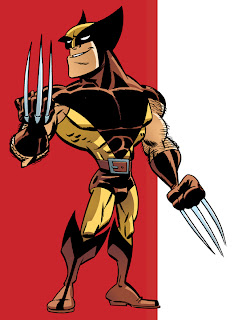 I chose this costume because I used to have an X-Men colouring book and Wolvie was in the yellow and brown on the cover. I think I used Indian Red to colour his boots and gloves, etc. on the inside pages (and please forgive my referring to the old crayon colour label...I don't know what Indian Red has become but I'm pretty sure it ain't still called Indian Red).
Plus my brother had the Secret Wars Wolverine action figure...so it's really the only costume I'm familiar with. 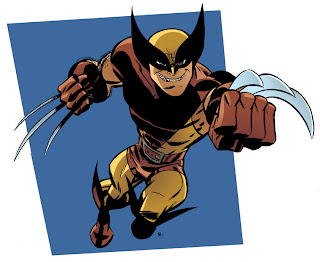 Eventually I'll probably draw Wolvie in the costume Frank Quitely gave him for the Grant Morrison run. That particular outfit is very beefcake friendly! :)
Hope you're all enjoying your summer.
j.

haw!!! I cannot BELIEVE you drew a big-headed Wolverine and didn't immediately tell me about it!!!

Looks fantastic, dude. Hope you've been having a good time off on vacation.

Weirdly, on the first one, I can almost see your Byrne influenced past...

Cho - I know! Wolvie's one of those guys who can't help but be a big head! He's only three feet tall!

Boy, I should dig up some of my high school drawings...I went from McFarlane to Byrne. Ugh!

I also have a big head Namor which I will soon unleash. Face the wrath of the SUBMARINER! IMPERIUS REX!!