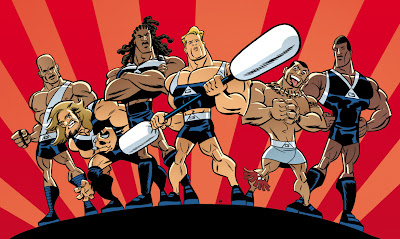 Following up last week's sketch with the full colour version. Man, these guys already seemed like cartoon characters to me just from watching the show. Which is probably why it was so easy to draw them even more cartoony!

Toa and Wolf are especially caricatured. And I think of Mayhem as the Predator (creature from the Schwarzenegger flick). He's really imposing and scary looking. Titan has the calm reserve of a leader even though there really isn't any one guy who stands out as the leader of this gang. I want to do a drawing of Justice with those big silly punching blocks on his hand...you know, the things the guys wear in the Gauntlet. Those things are dumb and should be on toy shelves by Christmas. And then there's Militia...he should probably smile more.

Super awesome! I particularly like what you did with Toa. And I agree, Titan definitely gives off a "Leader of the X-Men!" sort of vibe (and check out his cartoonishly dazzling superhero smile during the open credits).

Oh this is fantastic! I wish the women were half as fun as the guys in that show. I particularly like Wolf there. Great job!

Jon - Thanks. I think Toa looks like he's having the most fun...is he genuinely crazy or just "acting". And you're totally right about Titan. He's got that calm, coolness of a leader. And the same "boring" quality that Cyclops has in spades :)

Tegan - I just finished my drawing of the women...and it was a lot harder to do than the guys. The guys just have so much personality. The women are diverse but just not as entertaining...except Hellga, whom I love!

Fantastic work - you did a great job distilling their character!

It's also nice to know I'm not the only one who takes guilty pleasure in this revival. Still doesn't alleviate any of my secret shame for nursing a gladiator crush (Toa - he may look crazy, but I bet he's a cuddler when the cameras are off).

Keep up the great works!

Haven't seen the new show, but I was at a Grammy party and some of the cast was there. Mayhem was an absolutely gorgeous example of the male species! (Here's my blog entry on the party.)