You call him Doctor Jones, doll!

This weekend Indiana Jones: Kingdom of the Crystal Skull opens and I'm pretty darned excited. I love the Indy movies. My parents took me to see Raiders of the Lost Ark at the theatre when I was a kid. Usually we saw movies at the Drive-In so it was a real treat to sit in a proper theatre to watch a film. Raiders just blew my mind. I loved every second of it (and still do). The face melting scene at the end and the ghosts terrified my mother. She was sure we'd get nightmares from it. I didn't. But I did gain an undying curiousity in the art of movie making. Long before the internet and giant chain bookstores, I had to get all my info from what magazines I could find at the used bookstore and the corner shop. I still love figuring out how an effect is done...something that's lost a little mystery with all the green-screen business going on. I'm way more interested in a practical effect than something digital.

Which brings me to Kingdom of the Crystal Skull...I'm a little nervous to see another Jones movie. I trust Spielberg to make a fantastic movie but Lucas...oh, Mr. George Lucas seems to have suffered some kind of debilitating head trauma when it comes to writing a good story. I'm a little nervous about his part of the movie. That and I've seen a few commercials on tv and there are certain scenes that look really, really green-screen fake. The truck chase in Raiders is so great because it's really happening on a dirt road. The Kingdom chase through the jungle that I've seen in clips looks fake, fake, fake. 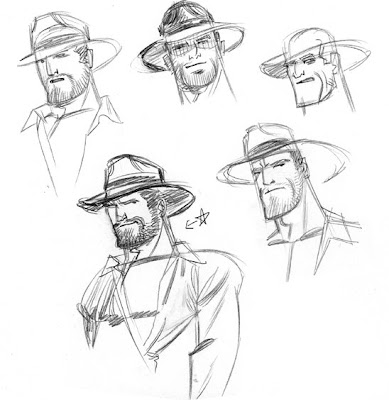 Enough about the movie. These sketches were done for a t-shirt that I have yet to make. I just can't settle on an Indiana Jones that I want for my shirt. Do I want the trademark smirk or the mystery man in the fedora (below)? Do I want a straight-up Indy or beefcake him out a little more? I just couldn't decide so I've let the project sit to the side for a while now.

I LOVE the last drawing - It's pretty hunky, yet it's not simply beefcake, it has a look and posture that screams adventure!

I had a huge crush on Harrison Ford/ Indiana Jones... but that pretty much ended with the third Indy movie. I just love how he's always running around sweating with his shirt ripped open with the rough beard... it really does the trick for me.
That cocky smirk is heavenly, and should definitely be in the final drawing (in my opinion).
Great work!! :)

I think both drawings are nifty, but neither screams Indiana Jones to me. It could be the clean line on the pants, or the too broad shoulders or the hyperextended knees. The bottome one definitley has more mystery and gravity.

Have you considered going in the completely other direction? Like the Lil" Doom Patrol figures on your other blog? The pose pretty much asks for it.

James - I kinda like that the last one looks like Indy right before his big reveal in Raiders. He steps out of the shadows and we see our hero for the first time.

Javier - I know what you mean. It's sort of Indy through a generic "Beefcake" filter. I could definitely do some Cutesy Indiana Jonses. In fact I bought the Adventure Heroes toys by Hasbro because of how adorable Little Indy looks. I can't believe how faithful they are to the movie for what is really a kid's toy. Mola Ram has a flaming heart in his hand, and Belloq comes with cute little head exploding Ark ghost! What every kid wants for Christmas! :)