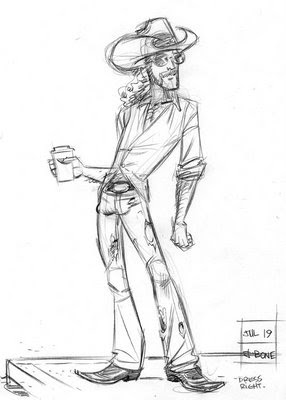 A for real guy I saw while out bike riding. At first I was simply mesmerized by his entire look...from the long hair under the hat to the pointy toed cowboy boots. He stood on the corner waiting for the light to change. Completely cool. A swagger in his step even when standing still. And then I noticed the front of his jeans. Though my drawing is a cartoon, the image does represent the real deal! Is it possible he was carrying a shotgun in his jeans? 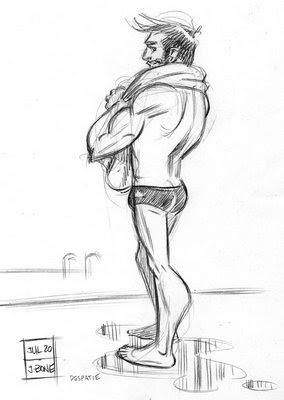 Alexandre Despatie was the inspiration for this drawing and today he just won a silver for Canada. Naturally I missed the event but I'll try to catch the highlights on tonights news. I'll do a better drawing of Despatie in the coming posts. 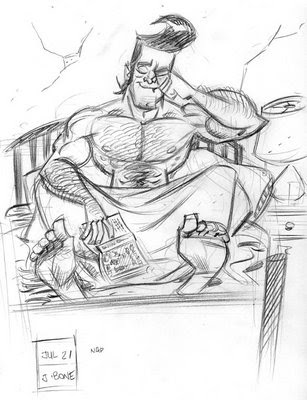 Ol' swoosh-hair makes another appearance. He spent the night reading in a seedy motel.
j.

The July 20th drawing of Alexnadre Despatie is great. This guy is so hot I'm surprised the water on his body doesn't turn to steam. Look forward to more drawings of him. I must admit I've been watching the games wondering who might may the "Guy a Day" cut. So many quality men. It must be frustrating to be faced with so much inspiration. May all your/our problems be this big! Thanks.

"Roadside Romance", eh ?
Will we ever see the cover?

Andrew W - I saw him interviewed after his win and he really is just adorable, isn't he! I can't believe he started his Olympic career at THIRTEEN!! Holy socks!

Musclsvg - I may have to do a week of Despatie...there are so many great shots of his diving poses as well as the usual "standing around in a speedo" shots.

Javier - So observant! I may indeed draw the cover in more detail. What I'd really like is to read the book. Something has made our big lug wake up with a grin!