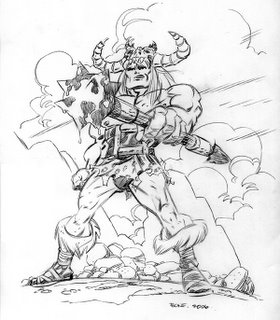 This one's for Johnny! Johnny Bacardi!
Over on his blog senor Bacardi has been writing about an old DC comic called Beowulf: Dragon Slayer. While I haven't read any of the stuff I did look at all the pictures and decided I wanted to draw Beowulf. He's got a ridiculous corset on which, for all I know, is holding in his guts after a particularly bad run-in with Grendel (or whomsoever is his mortal enemy). What I like about Beowulf is his helmet. It reminds me of the evil queen from Sleeping Beauty and the devil, Chernobog (Chernovog?) from Disney's Night on Bare Mountain sequence in Fantasia.

Since this guy is a barbarian I tried to be a little Buscema in my drawing which is why I'm showing the pencils...well, that and I just haven't had the time to ink it yet. I would never in a billion years deign to compare myself to the great John Buscema but his awesome barbarians were on my mind when I drew this. 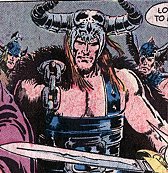 Oh, and here is a panel from one of the comics which I yoinked from Johnny's blogspot. It shows off his awesome helmet and his not so awesome corset with mis-matched suspenders. Crud...I just realized I should have added his cool fur cape...in the inking, perhaps.

Very cool! Ol' Wulfy has never looked better! Glad you liked the look at those books, which were a great mix of fun and adventure, and ended too soon. #'s 5 and 6 will be coming up soon...

Hey Nick, that link was great. I love those kind of statues with the bold features and deco muscles! I've got a book called Arto of the Third Reich and the sculpture section has several photos similar to the ones at that site. Awesome stuff...even if it did serve an evil purpose...

Johnny B, glad you like. I really must read your synopsis so's I know more about the character.