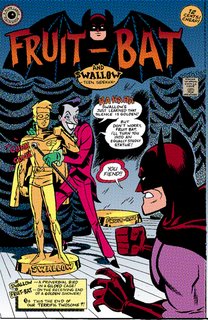 All this Superhero talk reminded me about a comic I drew waaaay, waaaay back in my early days (like, '98...'99). There used to be an anthology book called Love In Tights which was put together by fellow comic pals J.Torres and Clay Moore. I don't remember which issue it was in but I'm almost sure it was the last and I know that it had an Andi Watson cover on it. The original story was in black and white (I coloured this one image a few years ago) and parodied the old "Batman and Robin are gay" cliche. That idea is SOOO boring and wrong headed. It's obvious that it's the villains who are gay, especially the Joker. Sure the Joker has Harley Quinn but she's totally a beard. The old Joker used to tie up the Dynamic Duo and deprive them of their utility belts (in my story, their costumes, see next image). 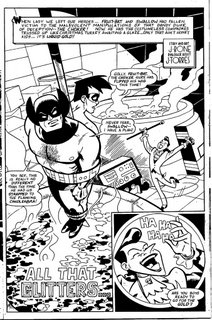 So I came up with a story wherein the Choker (it's a parody...I didn't say it was clever!) has our heroes in yet another deathtrap but he stops before delivering the final blow (pardon the pun...no wait...don't) and confesses his whole reason for existing is that he has a sort of superhero bondage thing! Yikes!
I really should find the comic and scan in the whole story so's you can read it yourself! Though I'm not sure I want to look at that early awful artwork.

Incidentally, the cover was inspired by Sheldon Moldoff who used to ghost for Bob Kane on the early Batman stories. I met Sheldon at a store signing once and really thought he was a terrific guy. The cover image was me paying homage to him.

Great stuff. I just read B. Clay Moore's BATTLE HYMN and he mentions working with you in the backmatter.

That's AWESOME!! You really gotta post up the rest of the pages...It's great to see how your work has matured while retaining all that charm, J.

Nice glimpse of the early work. I just read a pretty interesting column about how Joker is gay with a huge crush on Batman and does what he does so Bats will pay attention to him.

I would link it, but I'm too lazy to track it down.

On an unrelated note, I've been trying to track you down online for a while, Bone! Steve Manale's the only guy from the Las Vegas Cooke Contingent I've been able to get ahold of lately.

Hit my profile and drop me an email.

Hey Jake,
Nice to hear from you! Nice blog you've got. I have a copy of that MothSpy comic. It's one of the books I keep each time I thin out my collection. I never could bring myself to write to the guy after I met and hung out with him in San Francisco...your review touched on things I hadn't even noticed when I read it because I was blinded by its overall awfulness.

Anyway, uh...I couldn't get your e-mail address from anywhere in your profile. But I will get it from Manale or if you beat me to it you can get MY address from Manale. Either way Manale is an accomplice!

Cho and Chris - THanks guys. Chris, the very same issue of Love In Tights has a Midnight Hour story in it...I think Midnight Hour has appeared in Battle Hymn, has he not? (Revealing that, though I own them, I have not read my copies of Battle Hymn).

I have this baby!

This doesn't look awful at all... love to read the whole thing.