Through the Looking Glass Darkly! 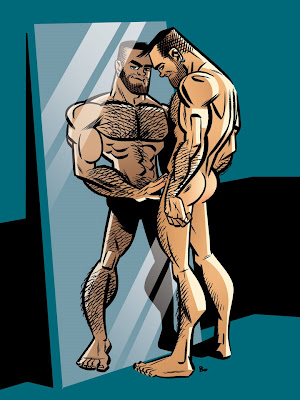 `Twas brillig, and the slithy toves
Did gyre and gimble in the wabe:
All mimsy were the borogoves,
And the mome raths outgrabe.

Beware the Jabberwock, my son! With jaws that bite and claws that catch. No Jabberwock here...just Josh and a pale reflection of his own self. We took some terrific looking photos in front of a mirror in one of our early sessions. Photos I'm still going back to and being inspired by. This one took a different turn when I thought more about how I see Josh. At this point I think I should let you all see what you want to see in images without the distraction of the "artist" :)

Interpret as you will the darker look of the reflected Josh, and the physical contact between the two. Sorry about the heavy shadow, boys. But at least you do get a nice view of drawn-Josh's rump.

In the comments section there has been a little discussion about the making of a sketchbook. I'd love to hear any and all input from you all about what you'd like to see. I'm considering one large sketchbook collecting as much as possible...but could also easily fill several smaller sized, themed books. Would one option be preferrable over the other? Smaller themed means being able to buy only those images that, shall we say, excite you most. More books means each would be less expensive, as well. Which is a plus.

Picture size is also an issue. Assuming the book is slightly larger than a standard comic book (roughly 6" x 10", 17cm x 26cm) would you prefer several smaller images per page with occasional focus on a larger finished piece? or large images throughout? I know I always prefer at least mid-sized images but sometimes there is that one piece that you just wish had been printed as a full page so you could enjoy it fully. On the other hand that large image that takes up a whole page isn't always the favourite piece and you wish room had been made for two more pictures for which the large image won't allow.

Such dilemmas. We should all have such easy problems to deal with :)

Looking forward to hearing your thoughts! Feel free to e-mail me (address in my profile) if you don't have a blogger account with which to post.

At NYCC a couple years back, Stephen Silver had two choices of sketchbook; a larger hardbound more expensive one and a smaller, less expensive one.

There's something nice about the smaller books, with an assortment of works in different stages...

Great graphic. Goes to show that even if you're a hot looking guy like Josh, you still deal with public/private, fantasy/reality, self/inner self issues. It's also great the way you show how a reflection can look different than it's original. It reminds me of a quote from "The Madwoman of Challiot", "Don't trust the mirror. It lies."(Pardon the paraphrase)

As for how to present your work in book form... Wouldn't your publisher assign you an editor to help you after everything is collected?

You have a new avatar on your profile. To me a good avatar always makes you want to see the entire shot. Could that happen?

C. Edwards - I'm currently leaning towards the smaller, themed books. They would still be many paged...just not a giant volume. Thanks for the input.

Musclsvg - Publisher? Editor? I'm doing this on my own, baby! If a publisher had any interest in me I'd pursue it but as it stands now print on demand is the way I'm headed. Sort of like the music industry and the way certain bands are putting out their own music. Do it yourself and nearly all of the money comes to you direct. Give it to a publisher and I lose income, as well as certain rights.

The mirror doth, indeed, lie. Don't forget that you're also seeing Josh through my eyes (and brush). So the way I see Josh may not be the way he sees himself. Which is to me the double fun of playing with his image.

Ha ha! The avatar will be revealed in due time. Not that it's anything all that secret...in fact you can probably guess who it is based on the colours alone. However, I never like to post my work images until they've at least appeared in print somewhere else.

I'm somewhat flattered, Musclsvg, that you thought I had a publisher/editor lined up for my sketchbook. It suggests an outside, real world interest in my work beyond the Blog-o-sphere. As I say, I'd not considered approaching a publisher at all. Perhaps I am going about things backward.

Thanks for the thoughts, guys.
best,
j.

Fun idea on this drawing. It's really creepy.

As for the sketchbook, I'd say, go for the smaller, themed books. If only because I figure it will give us more images collected, in the end.

Is the Shazam image from your DC cartoon comic book issue?

It's sexy at the most!

J. I remember you had a kind of tutorial on drawing... where is it?

About the sketchbook - Because I absolutely LOVE the pencil work you post here, I think a sketchbook with about two or three bw drawings/sketches per page, interrupted here and there by a single page, finished (maybe colored) illustration would work really well.

Also, I'm kind of a size queen in that respect (ha!), so theidea of a thicker volume appeals to me more than many smaller books. But hey, that's just me!

Can't wait for it, though, whatever the format you end up adopting!

François - "Creepy" I was not expecting as a reaction :) Although I did want a hint of menace in reflected-Josh. He's daring you to watch...
The Shazam avatar is from a DC cover, yes. Not from an issue of Super Friends, though.

LTruzzi - Thanks, man. I did a colouring tutorial which was posted at my Blah, Blah Blog. The link is: http://gobukan.blogspot.com/2006/11/colouring-tutorial.html which you may have to cut-and-paste out of here. I balked at doing a drawing tutorial. I enjoy talking about what goes into a drawing but would fail at explaing how-to-draw. Besides, who the heck am I to tell anyone how to draw :)

James - Thanks. I, too, enjoy the hefty weight that comes with a thicker volume. However, there is something to be enjoyed in a quantity provided the quality is solid.

Another great look at Josh. I like the differences between this one and the earlier mirror drawing of Josh from Feb 16. More light is in the room now, revealing even more of the man to us and himself. You titled it "Through the Looking Glass Darkly," but it seems more like it's about stepping into the light.

Anyway, perhaps I'm over analyzing. At the end of the day, it's a really good looking picture.

As for the sketch book question, I like the idea of the smaller themed books.

Jeff - "Through the Looking Glass Darkly" is just me trying to be all literary in my references. Alice In Wonderland I've read, but not Through a Glass Darkly...so I don't even know if the reference applies.

BUT you've definitely suggested another interesting image in my mind. I think reflected Josh really should step out into the light. What would happen with two Joshes inhabiting the same space. The mind boggles.

And another vote for smaller themed books. :)

I guess it all depends on how you want to sell them.

Online, I personally would prefer just buying the bigger book, but I think the smaller books would be easier to sell at Cons and places like that.

People who are unfamiliar with your work would be willing to take a chance with less of an investment.

I guess the question for me would be more of, which version has a) better quality images and b) which is more complete.

Either way, product is product. I have a small (4x5) cheaply made Adam Hughes sketchbook that I love.

Oh, do u ever make it out to the San Diego Con?

As I will be working away from home for a month, I just purchased my J Bone Cafe Press Throw Pillow to make my hotel room a bit friendlier.

Javier - Y'know, since I'm going through print-on-demand I might should consider a solid hardcover with as much as will fit in it. And then take some of the artwork, arrange it by theme and do smaller softcovers at the same time. Then if anyone wants it all, it's there.

And none of that shady business with some artwork appearing or not appearing in certain books so you have to buy it all, nonsense. I hate that kind of stuff.

I've also got an Adam Hughes sketchbook. My favourites are the ones I have by Bruce Timm, Ben Caldwell and Chris Sanders. But I also own Shane Glines' giant collection and I love it!

Thanks for picking up a pillow, Javier. I hope it brings snuggly comfort to your room :)
I do sometimes get down to San Diego Comic Con. Lately it's been far too insanely busy there so I've avoided it. I'm considering attending this year, however. You're local to San Diego, yes?

But Comic Con normally coincides with a trip I take to England every year. But might delay it this year to wallow in comicdom for a couple of days.

I love the drawing! I could see you doing a little comic book fantasy based on it.

As for sketchbook size, I like the smaller sized ones!

Yes, a sketchbook would be fine. but please, with comments! I find more and more difficult to read a sketchbook whthout any commentary from the creator on his images. The story around the images is sometimes as interesting as the image itself and give it more meaning.

Javier - Well, Comic Con just consumes that entire area of San Diego. The parties are fun, though. And it's often the only time I get to see many of my comic friends.

Aman - Mirror gags remind me of Little Ego...Heavy Metal ran a series of her strips. Little Ego would get into Little Nemo style fantasies and one of my favourites involved her mirror image stepping out, with each subsequent duplicate causing another set of duplicates to step out of the mirror. And then they did girl stuff to each other. And I don't mean doing each others hair...unless we're speaking metaphorically.

Xavier - Commentary...hmm, I'd not considered that. I do love to tell stories. I also find more enjoyment in sketchbooks that give some context to the artwork. I will most certainly keep it in mind. Thanks.

I'm still gunning for "pop-up" style sketchbooks. Although maybe the pop-up comes from the reader (snicker).

If it's not too late to voice my choice... I like smaller sketch books. That way there's more of a chance you'll slap one together that features furry Wolverine boys! (commence drooling)

But seriously, glad you're seriously looking into this. I know of a site LuLu.com (print-on-demand) but never actually ordered anything from it (yet).

Of course, I'd settle for "portfolio style" sketchbooks as well: larger sized card stock/ bristol pages that are collected into a folder. (Remember when you could buy mass-produced portfolios of your favorite artists? Or was that just the 70-80's??) Anyways, I'd go for that, too. Even if it's just laser copies on card stock.

BTW: I'd kill for an original silk screen, gocco, or block print! You're work would truly sing in that medium. *wink*