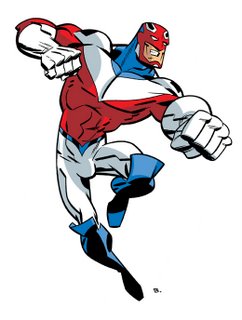 Man, Alan Davis draws some sexy men. His Captain Britain was a drunken lout who sat around shirtless alot. Davis was the only artist I knew of at the time who wasn't afraid to draw his male heroes as sexy as his female's.

As I said in my previous post I had a little trouble with this drawing. My first attempt had really bad anatomy...I think it was worth the redraw and this version (although it still has problems) is a gajillion times better than the first (which you will never see). This one's for Matt over at DudeTube! 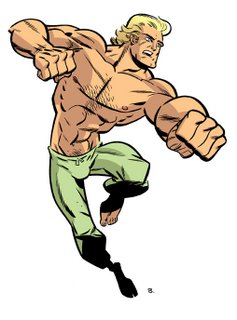 I completely agree. Davis' guys are just as sexy as his women and I seem to remember more shirtless Brian Braddock scenes in "Excalibur" than any other character. There were even a couple of nearly naked, muscle-y guys in "The Clan Destine". Great choice, Matt! And good job, Mr. Bone.

Just wanted to drop you a quick message and tell you that I absolutely LOVE your work! You have a fantastic style that blends all of my favorite aspects of Comic Art into one super sexy package!

LOVE your Captain Britain and I have always been a huge fan of Alan Davis as well!

Also, can't wait to see the complete Jett Vector! It is looking so awesome!

Anyhow, fantastic stuff! Drop by my blog and say hello if you get the chance sometime!

All the best,
Patrick Fillion XOXO

Klahd - I loved Clan Destine. I always thought Alan Davis had a great way with characters and interesting takes on super powers (Like the super sensitive guy who had to live in an isolation chamber).

Thanks Patrick! I love your blog. I could spend all week surfing through the artists you've written about and still not see it all.

Anonymous said...
This comment has been removed by a blog administrator.
4:23 AM

I love your work, I've always wanted to tell you that. I had decided that I would rather admire from afar to spare you from my 'gushing' but when I recently saw the drawings you posted of Brian Braddock inspired by Alan Davis' tenure on Excalibur I couldn't resist letting you know how great it looked.

I have always regarded Alan Davis as one of the greatest comicbook artists (only if Mark Farmer is inking him, though). The way he draws men or anything else for that matter is flawless. And eventhough I don't mind his Brian Braddock...his Nightcrawler was the thing that really made me a fan. Those legs...that tail...amazing.

So in honor of Mr. Davis and yourself I have made a drawing of Kurt Wagner in those little red shorts Alan always had him in. It's not as great or as professionally done as the stuff you put out (I'm only good at line drawings and nothing else) but I'd like you to have a look at it anyway.

So please let me know whether or not I should post the link to the drawing here or whether I should e-mail it to you.

Keep up the brilliant work and get Jett Vector published!!!

Many thanks, Voltaire! I actually wnet ahead and clicked over to your blog. I think you have nothing to worry about in showing off your drawing and I'm glad you decided to post a comment.

Please do post a link to your Nightcrawler. I think the Alan Davis fan club (which is slowly exposing itself on this very board) will appreciate your rendition.

I hope you have some good art schools in your area because you are already off to a great start. Not to sound like an old pro or anything but if I may offer one bit of advice...when you get to college learn how to draw and paint EVERYTHING. Not just comics. My teachers made me drop comics all together so that I could learn how to render in more than just linework and I think it helped me become more well rounded and to create my own style. I think you'll find the way you draw changes throughout your college years and that's a good thing.

Unfortunately, there are no art schools anywhere near (or far) from where I live (good or other wise). Regardless, I'll keep at it.

Here's Nightcrawler (I tried to post the image on my blog but it doesn't want to show):

We could call it eGAAD - Gay Artists for Alan Davis.

We can come up with a secret handshake and passwords -- we can be just like The Stonecutters -- or the Freemasons! We can wear periwinkle robes -- no, mauve...

What is our Alan working on lately, anyway?

He's recently done a comic that will probably be unreadable, but pretty (to be published in September):


And I guess he's still working on that Fantastic Four: The End mini-series.
And in case someone didn't know it, here's his site.

And your Captain Britain is fun (that in costume/out of costume idea is really good!), too, although, like other posters, I had a soft spot for his Nightcrawler.