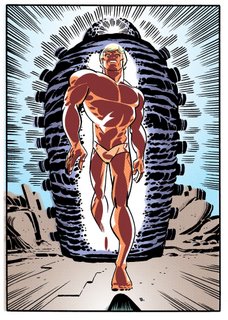 HIM/Adam Warlock was a request by HardCactus (such odd names parents give their kids these days...makes one long for the simpler times when names like Jebediah and Gaylord were more the fashion). I didn't know that much about the character but when I found out he was created by Kirby I had to, once again, draw two versions. The first is my take on the birth of HIM...who first appeared in the Fantastic Four #66 and #67 for all of two panels. I don't have colour copies of those issues but was told that HIM was basically nude. I've also seen HIM coloured with red briefs but I opted to go for the slightly-lighter than skin tone variant.

Incidentally, one of the scientists who created HIM is a totally hot bearded guy in a tight t-shirt! God Bless Jack Kirby! He knew how to draw MEN! 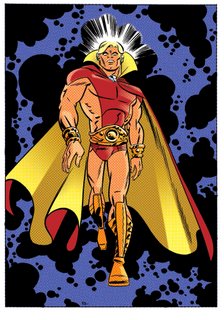 The second version is the Jim Starlin re-design which I know almost nothing about. I had a couple of issues of Infinity Watch (?) with lovely art by Tom Raney...but I don't know what happened to the character to make him Adam Warlock. What I liked about this guy was the red and gold in his costume. Anyone who wants to complain about the near nudity and impossible costumes of female superheroes need look no further than Adam Warlock to see that the same rules apply to the men! Honestly, who would think to match a collared cape with a tunic and short-shorts!?! Richard Simmons maybe?

I also want to wish a Happy Pride to everyone! I went out last night and Church street (here in Toronto) was packed to the gills! I'll be keeping an eye out for the perfect Jett Vector model and if I'm brave enough I'll snap a picture or four!

Special note to Francois - I haven't forgotten about Myles and Phat! HIM was just so cool looking and I knew exactly what I wanted to draw that I just had to work on HIM first.

Having just re-read those issues of FF, I'd have to say you nailed it (no surprise there). Good job, j!

I especially like the screen dots Bone-man! Brings me back to the good ol' days...I'm not a fan of todays Photoshop-esqe coloring techniques. I prefer the Golden & Silver Age to today's comics...but that's just me.

So when can I expect to see the art delivered to my house? Heh!

PS - I just picked up an original art page that re-tells HIM's origin...check it out J. Bone (your favorite scientist is in it):
http://www.comicartfans.com/GalleryPiece.asp?Piece=171153&GSub=27351

Gosh, I certainly don't mind that you took the time to draw Him!
Wonderful art, and as Nick said, you got it completely right.
I love the Kirbyesque shadows on his body and on the cocoon.

great colouring on both pieces man! i especially like warlock - he was a favourite character of mine when i was a kid!

Looks great and I was so glad to hear you're working on Vivisector and Phat. Vivisector is my all time favourite character...ever! If I could have begged you to do one, I would have begged you to do one of Myles...but now I don't have to because you're already doing it. Ah, and Phat is also in it! Oh, this is going to be great...can't hardly wait.

Keep up the amazing work.

P.S. Please don't do Phat in his fat form...have him be nice and svelte like Eminem.

Nick - Thanks. Kirby is endlessly inspiring.

Hart - Nice comic page. That is the very scientist I now have a crush on! Obviously I too have a love for the older techniques...especially the screen dot. You might also have noticed that it's slightly off register. Just for fun.

Calavera - And so I will have to ask you later how HIM became Adam Warlock! And then have you do a drawing of both for us!

Voltaire - Thanks again! All time favourite, eh? Well, I hope I can do justice to Vivisector. Allred draws much hansomer men than I do.

Bone, those are effing beautiful, especially the first one.

Ohmygod, you really outdid yourself.

HIM rocks! That first drawing is doper than dope.

No, it is you guys who rocks! Thanks!

Reading through my old posts I saw that someone asked how I do the half-tone screen. It's totally a Photoshop filter.
Under the Filter menu, go to Pixelate then Color Halftone. You can adjust the dot size for clarity and retro-osity. I always create a second layer of colour, apply the filter and then shift it slightly for that off-register look.

Oh, it also works great for black and white half tones.

Hey Bone...looks like it's official.....HIM / Adam Warlock is a big success!