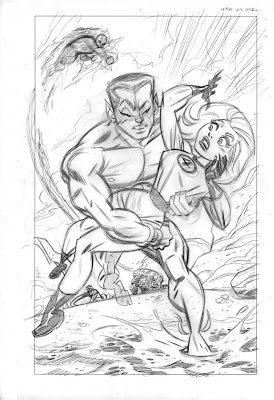 I've had Namor on the brain (must be the swimsuit) so I drew up another Namor image. Okay, so this one's got a little Cheesecake in with the Beef but I'm sure you guys can handle it :)
I always loved that Namor wanted to steal Sue away from Reed. I couldn't find the exact issue in my collection but I'm sure at one point he picked her up and was about to reach the water before he was stopped by the FF...or by Sue's gentle pleading.

Namor's face kinda bothers me...it's a little too dull. When I ink it I think I'll rework his expression and then I'll post the inks when it's done. 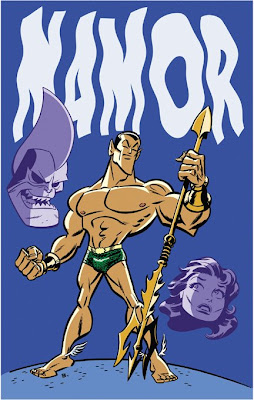 Namor is one of my favourite Marvel characters. You might think it's because he runs around wearing nothing but a swimsuit and you'd be right. But there's more to it...he's a hero who's kind of an ass! He's arrogant and angry, full of hatred for mankind yet loving to his own people. And he's been drawn by some of the best artists out there. Jack Kirby drew him in the Fantastic Four, John Buscema rendered him awesomely in his own book and Namor's creator Bill Everett drew him with an unearthly flat head and pointy chin...a weird shape for a heroic head indeed.

My drawing here is sort of a recreation of Buscema's 1968 Namor cover with an attempt at Bill Everett's bizarre head shape. In the end I didn't go as far as Everett...he just started to look too bizarre for me. My drawing is cartoony but I didn't want him to look goofy.

The floating heads are Tigershark and the Lady Dorma.