Guy a Day! Still catching up! 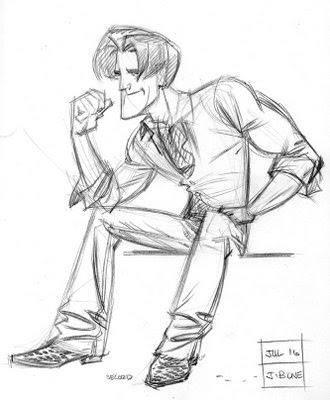 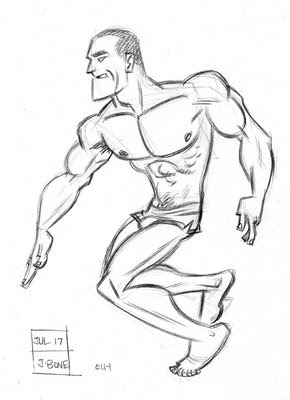 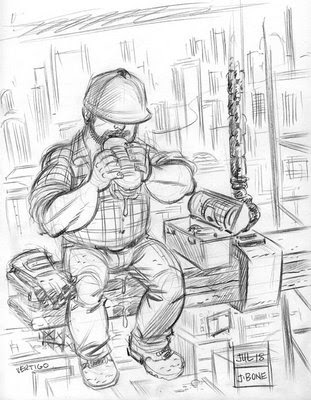 I find myself with not much to say today...there's a thunderstorm rolling in and my lights just dimmed. Fortunately my computer is plugged into a power bar with battery back-up so I didn't lose my connection. I do believe, however, that I will log off and sit on my front porch to watch the light show.
best,
j.

Have long enjoyed your artwork and site. Your drawing for July 17th looks like some of the beef we've been seeing in Men's Gymnastics from China. Set you VCR. Could be a limitless source of inspiration.

Such great characters you create with each sketch! I'd read a story about every single one. :)

Forgive my ignorance, but who is Secord? Whoever he is, he looks great.

I also like the uber-generic "Guy." He could be the cover of one of those "Learn to Draw Superheroes the J-Bone Way." books.

Musclsvg - Much appreciated. I saw some pictures from a judo competition that looked very inspirational. I've been trying to catch up on my Olympics online...have I missed Men's Diving already?

Aman - Thanks, Aman. I try to make the guys more than just pin-ups.

Javier - Ha ha! "Secord" is "Cliff Secord" aka The Rocketeer. The guy's hair reminded me of Cliff's hair from the film and comic book so I called him Secord. And thanks.

Y'know, I've actually met Bill Campbell (the actor who played the Rocketeer, natch) at a convention. He's dreamy. After getting a signed picture from him I'm sure I mumbled something incoherent and left red faced...I was a little ga-ga over finding him at the con!

Good news J. The Springboard Diving is on Aug. 18 & 19 and the Platform Diving is on Aug. 22 & 23. Unfortunately, the Synchronize Spring Board and Platform competitions have all ready been held. Diving seems to be the last place you can see athletes compete in the original brief Speedos. If the synchronize venues are any indication, they're been worn low slung this year.

Check them out. Might be a couple of "Guy a Day" candidates.