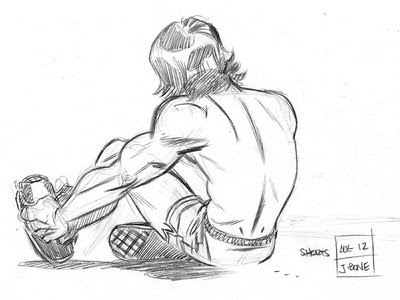 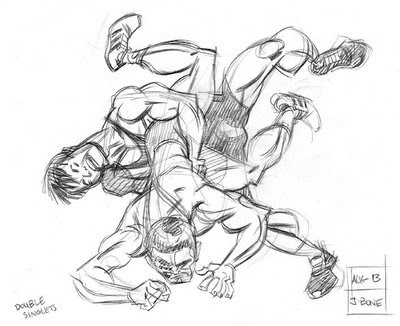 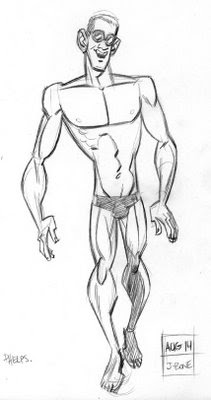 The Olympic drawings begin this week...I've already done a few days of Alexandre Despatie back when he actually competed. Since I am still catching up with my guy a day doodles we all get to revisit those thrilling summer days. I don't know who the wrestlers are...it was a random net jpeg that I used as reference. But everyone knows Michael Phelps, winner of EIGHT (thanks, Javier) weighty awards. I wanted to caricature him based on all of the articles that appeared describing his abnormal physical attributes. Apparently Phelps has incredibly long arms, a long torso, and an adorable grin. Not in the drawing are his supremely quick reflexes, faster than normal pumping heart, and webbed toes.
I've got some great photos of gymnasts to draw from next...and then I think I'm gonna have to come up with some way to speed through September. I've really got to get caught up with myself :)
best,
j.
Posted by j. at 7:42 PM

I think you caught the essence of Michael Phelps to a T. But I don't know if that is compliment since I did not find him particularly compelling as an individual, since by his own admission all he did was eat. sleep, and swim.
But a slight correction is in order. Mr. Phelps was the winner of EIGHT medals, not seven.

If you want to draw a truly great hero/athlete, how about Al Oerter...

It's going to be hard to catch up when you've all ready surpassed yourself. Such great drawings I don't know where to start. The first has the guilty pleasure of a hot stud unaware that he's being photographed. The second is amazing because of all the different perspectives generated by the intertwined arms, legs and singlets. But the gold has to go to your caricature of Michael Phelps. You've taken his so called abnormal attributes combined them and still turned out a really hot graphic. Plus, he's wearing a traditional speedo. Way sexier than the full body suits we saw this summer. Don't worry about coming from behind. I'd say you're at least three body lengths ahead. GO BONE!!!!!

goooooood girl said...
This comment has been removed by a blog administrator.
8:16 AM

Javier - Thanks for the award correction. I knew I should have done some research!
And thanks for the link to Al Oerter. I'll look him up and maybe do some pics. I actually had it in mind to do some classic/vintage Olympic pictures.

Musclsvg - Gosh...I'm blushing.
Thanks, man. I aim for the Gold but will happily settle for a Bronze...especially if he's got a good sense of humour.

If you're taking suggestions for possible Olympians how about Jason Lezak? He made Phelp's 8 gold medals possible. If it would help, here are some photos:

P.S.: More drawings of Alexandre Despatie would be great too. He's the only guy I've seen that can be standing dripping wet in a speedo and still have a gritty grudge going.

This Just In - Thanks.

Aman - Ha! He is bizarre...and yet still appealing. It reminds of Sarah Jessica Parker's line in the movie "Ed Wood".

"Do I really have a face like a horse?"

Dude, your blog is the sweetest find on the net in a long time. I really love your style.

Wish you could see my page and get some critique from you.