Or -- what I do when I should be working! This is what happens after I've been drawing on napkins at the bar. I try to translate the guys I've seen and sketched into cartooned versions. When I draw someone at the bar there's usually some characteristic or feature that I want to exaggerate. Sometimes I get it in the bar sketch -- but often it's not until I'm messing around on paper at home that I get that "thing" I want. 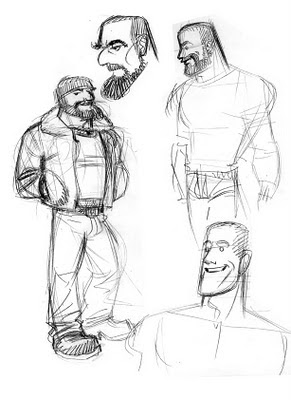 The guy above is Toronto leatherman Sean Cribbin. I've drawn him, and his boyfriend, before when I saw them laughing and hanging out at the bar. Sean's got a heavier beard and I wanted to get that chin extension. He looks mean in the head-shot, but I assure you he's never been anything but smiling when I've seen him out.
Oh, his shirt was also riding up just a little bit and that peak of flesh above his jeans was just oh, so lovely! 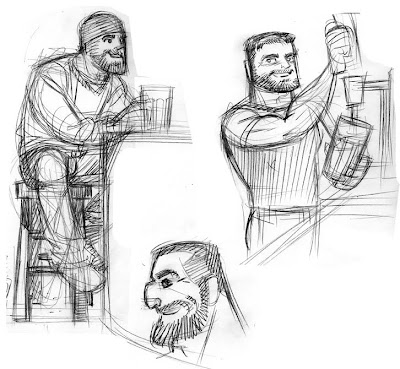 This page is an attempt at the guy I introduced myself to. It's still not exactly right -- there was something about his strong jaw that I'm not getting in my drawing. The other two guys are Woody's bartenders. Adorable, hot and friendly! Am I out at the bar too often? Perhaps! But who can blame me when surrounded by such delightful man-folk! 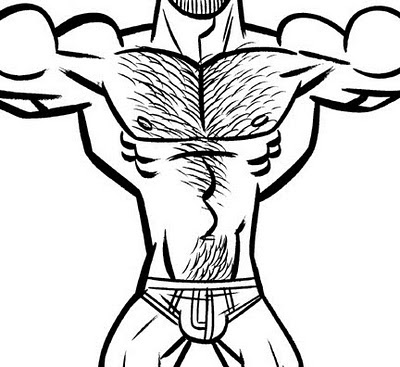 And this disembodied torso is something I'm working. It's a paper-cut out doll. No. Not Roger Rodgers. It's someone I've never drawn before and will be revealed in due time.

All right now! I've got work to get done! Enough porn-crastination!
Be well, boys.
j.

youre drawings make me want to move to toronto!

That guy is so chesty! Hmmm...someone you've never drawn before...that leaves out a lot of people. It's not Tom Cruise in Risky Business (he was a skinny nothing back then). Let's see...it's not Namor or Wolverine, Spiderman, Superman, Batman, Wonder Woman (heh), it's not you, someone in tighty whiteys...Stifler? Also, why don't you ever draw brown dudes? I love those sexy Indian noses!

I agree with Graphite!

Does Woody's have any busboy jobs open? :}

Graphite - Maybe I should look into funding from the tourist board :)

Grapestain - It's true -- I lack ethnic diversity in my guys. I also don't draw a lot of twinks, blonds or horses. I'll work on some sexy Indian noses!

Lou - You can always look into it. Even those roles are filled by some damn hot fellas. Isn't that right, Grapestain! ;)

Grapestain - I get those urges all the time. I guess the difference is I can act on my urges :)
A twink is a young gay man, slender of body, usually with little to no body/facial hair.

Well dude, its all cool hahaha, i recently tried meeting cool cats through facebooks. It feels weird but its kinda like a quick introduction to whoever ya might not speak to at the bars hahaha. Of course, too many Jay bones on that site hahaha.

WOOOOF, I love your "Guy a Day" posts.

You capture hot guys, not models.