Following in the grand tradition of monsters frolicking on the beach I submit to you my second cartoon in the series. 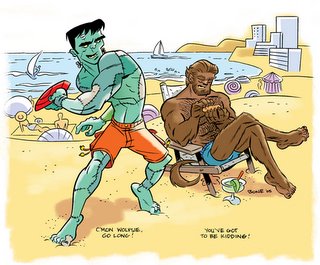 Oh, and you're not mistaken... the punchlines are cheesy. And once again I find myself approaching the frightening territory of the "Furry" (if you don't know what that is I suggest a google search then a cleansing of the eyes and brain). I suppose it's inevitable when you attempt to "hunkify" fictional characters. I even gave the Wolfman a tail for an upcoming joke. 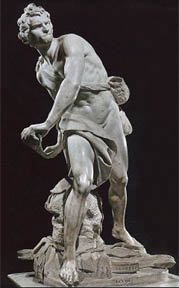 Frankie's pose is loosely based on one of my favourite sculptures, Bernini's David. Even though I didn't copy it I love the look of determination on David's sculpted face.

Y'know, so far the hardest Universal Monster to "hunkify" is also my favourite -- The Creature from the Black Lagoon! He's a fish man! That's not really all that sexy. Not to me, at any rate. The easiest one to do is the Invisible Man!

And wait till you see Igor!

I love how you took a work of art and used it to inspire you to make the pose for Frankie. You are now my favorite cartoonist, sir. I love your style of drawing. I just ran across your blog yesterday and have been going through each and every blog entry from end to beginning.
I wasn't really going to post a comment because I didn't want to come across as cheesy, but this one, for some reason, just called for a comment.