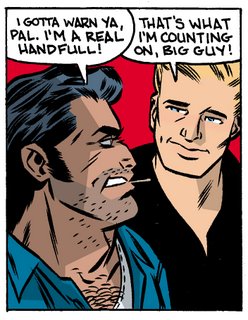 I swiped the composition for this from a romance comic panel. Some of those old romance comics had terrific art in them...John Buscema inked by John Romita, Jack Kirby well inked by Vinnie Colletta (the same team is not so grand in Marvel's early Thor stories), and also a bunch of artists who's names don't so readily come to mind.

There's a terrific book called Truer Than True Romance. It's a collection of old romance stories with new dialogue by Jeanne Martinet. Too Dumb for Love is absolutely hilarious!

One of these days I want to do a gay romance comic that's just as cornball as most of the old romance stories and just as lovingly rendered!

Yay, Romance!
The cornier, the better!

By the way, Jeanne Martinet probably swiped the idea from John Lustig's Last Kiss. He did some gay-themed panels which were really funny: http://www.lastkisscomics.com/merch/magnet-gay.htm

i remember that Maurice Vellekoop did a several page story that was in Drawn & Quarterly that was a gay romance in the 1950's style. it was fabulous and hilarious. check it out.

Just checked out my copy of Vellevision and now I remember that story! The dark haired guy is a terrific drawing of Cary Grant!

The magnets at that link are hilarious. I love the surprise party.

Try reading those Kirby and Colletta THORs again, you must have been drunk the first time you did.

You are actually comparing the Kirby-Colletta romance work favorably to THOR?

The comic book world hailed their THOR collaboration as an artistic breakthrough. Don't believe I ever heard that said about their romance art.

Incrediblyluckyguy - You must have been drunk when you typed your comment. No one in the comic book world has ever hailed Kirby inked by Colletta as an artistic breakthrough. Read pretty much any issue of the Jack Kirby collector and you'll find Colletta pretty much railed on as one of THE WORST Kirby inkers.

The Collector ran a panel by panel comparison of Kirby pencils vs. Colletta inks showing just how much ol' Vinnie didn't follow what Jack was doing.

As for praising the Kirby/Colletta team-up in romance comics...I wrote about it May 6th 2006. Now you've heard it praised.