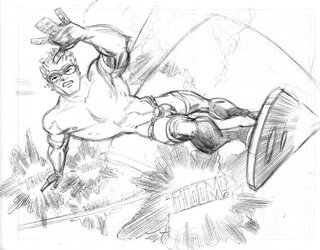 Zipping through the cosmos to a planet near you comes Jett Vector, SpaceCop! I thought I'd share a couple of images from the Jett Vector pages I'm currently working on. I'm still working on how realistic I want my "realistic" anatomy...right now it's a cross between my attempt at John Buscema while keeping the Kirby influenced chunky inks and my own cartooniness! I'm trying to just plow through a bunch of pages and work out the kinks as I go. 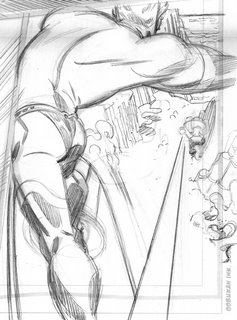 In the opening pages of Jett's first adventure he's chasing a fishman who has stolen something of value to the royal family on some far-out planet. I teased a writer once about the lack of imagination in futuristic stories and how wheeled transport becomes "hover" transport. Hover-scooters, hover-boards, hover-cars...there must be more creative ways to get around.

And then what do I do with my first issue of Jett Vector? I put him on a hover-board, just like the Silver Surfer. *sigh* I tried different means of transportation but none worked with what I needed to happen in the story. And the planet he's on is mostly water so a hover-surfboard made the most sense.

Anyway, hope you guys like the art. I've got to get back to work!

p.s. I noticed that my links and profile business are all the way down at the bottom of the page. I don't know whay that is. I considered changing the template but I don't know if that will delete comments or posts...if anyone knows a solution feel free to post and let me know. Thanks.

i like how Jett lost his shirt. would still love to see a color scheme.

your links and profile are up on the right side on my screen. maybe your window is not wide enough so it flows down?

Your pencils are wonderful, lots of energy. The unshirtyness (that should be a word) of Jet is, admittedly, a plus :)

That whole "sidebar" thing happened to me once to, but it was after I added something to my template...

Stan - Thanks. I was thinking Jett would have blue skin with white hair. But I know I'm thinking that because of the Star Trek aliens the Andorians (look 'em up). But they are much uglier than Jett and have antennae at the back of their heads.
And it wasn't my window it was my setting for font size. A medium setting pushed the links and stuff down to the bottom. Me, duh!

Francois - May I have the word in a sentence, please. "My favourite part about summer is the unshirtyness of all the men."
Works for me!

Klahd - Thanks. I'm up to page 8 so I should have more to show soon.

Eric - Thanks, as well. Naturally I expect you would know about the Silver Surfer. I hope I'm not doing too many embarassing non-surfer poses! :) Air surfing is different from surf on water.

The word is all yours. And I agree with your sentence.

Can I ask for a drawing on your site, sometimes when you've got the time?
I'd like to see your version of Vivisector and Phat.

I was wondering if you do commissions? please email me at shield51@sbcglobal.net

Francois - Ah, Vivisector! I loved that fuzzy, nerd. He was my favourite character from the X-Statix and when I inked Mike for the Princess (Di) run I always tried to do a better job on Myles. I regret turning down that one issue they did of Myles' back story (remember that one? I think it was right after the Princess story...) But, I had too much work at the time and couldn't possibly do it.
The long and short of it, I'd love to do a drawing of those fated lovers.

Hart - Many thanks. I haven't actually done any commissions...only requests. I'm afraid my schedule is pretty full and only allows for little drawings here and there. I'm always looking for inspiration, though, if you want to request a character.

The Myles story was fun, Milligan turned the ex-gay idea on its head.
I look forward to your drawing if you find the time to do it.

Well, look at the cover for the French edition of his first appearance:

markymark said...
This comment has been removed by a blog administrator.
10:46 PM

Yeah, you have to wonder if the artist who painted that hadn't seen the film. I'd like to think he had, because frankly, that cover was one of my earliest memory of finding a drawn man rather attractive (okay, I was 12 or something like that).