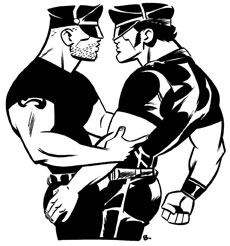 Yup, I've resorted to using the same image again just to fill out a Blog!

Ha! Just kidding. I used that image because it's a nice two man pic to illustrate the news that MEATCUTE interviewed little ol' me! MEATCUTE is a great site for finding new and old Homoerotic artists! He who goes by the "name" Klahd kindly honoured me with this months "On The Grill". Check it out!

Also, I'm posting something new! To me it doesn't really qualify as Beefcake because it wasn't drawn to be sexy...but it is a guy, and a usually handsome one, too. Poor Tony Stark. 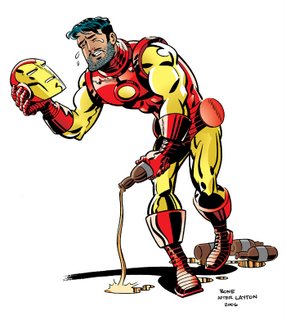 The story behind this drawing is this: It's a recreation of a drawing I saw by Bob Layton. Bob was the artist on Iron Man when they made the character an alcoholic. Never having read Iron man I have no nostalgia for this particular era...I just thought the image of Tony Stark staggering around in his Iron Man outfit was really funny!

So Tony Stark pouring the liquor is an "allegory" for peeing?

Bob Layton's original had Tony spilling his beer...which is such a waste.

Poor Tony is so misunderstood! I would go into this whole disertation, demonstrating my godly nerd abilities, to discuss all things ointless. But I would like to preserve my cool. I love that humor in your picture though. There was definitely a chuckle.