A show of Flesh!

If there's one thing I love more than a bit of beefcake it's Beefcake in Space! Here's another concept I worked on for a while before procrastination and paying work had me put it aside. I'm pretty sure I had just seen the low budget Flesh Gordon on tv which led to me coming up with a totally gay approach to the character. The movie Flesh Gordon is pretty crummy (Emporor Wang's face make-up is abso-fugly hideous) but there is some neat stop motion (penis shaped aliens) and the quickest shot of gay sex (look for it in the sequence with the tree-men). Worth it if you can catch it on late night tv as long as they don't cut out too much of the naughty business. 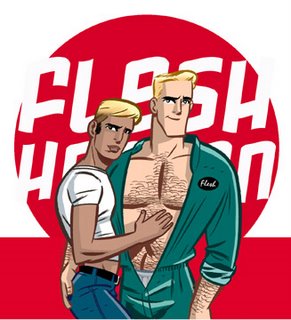 The more I worked on it the more I wanted to change the name...Flesh Hardon is just soooo obvious! Too obvious to actually be funny. I think I also abandoned the idea because I'd created Roger Rodgers and he turned out to be a better, and more original character than Flesh G. would have been. 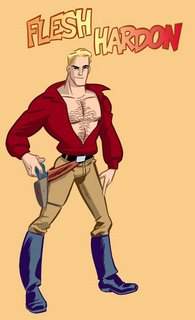 Enjoy, guys. I should have some new work up soon. In the meantime I highly recommend checking out Britdoodz . They've put up some sequential art and it's really beautiful, sexy stuff. You may have to e-mail them to access the gallery, I don't know if that's still how you get in but it's totally worth doing. Also check out DrawFellas for some lovely, and lovingly, pencil rendered men.

Damn, when will you stop teasing us with all those fun ideas?

By the way, there are no links to larger images, at least for my browser.

Francois - Sorry, but teasing is in my nature! I just can't help myself. :)

Sorry about the larger image link not working...when I posted this Blogger was doing funny nonsense again. The images aren't actually that much bigger...when I pulled them off of an old back-up disc there were no Photoshop files...only these little low-res jpegs.

And wassup Bone? When are we gonna see one of these characters in all their sexy completed story glory?

I think we should all pile up on Bone and make draw comics for his characters.

C.Edwards said...
This comment has been removed by a blog administrator.
2:56 PM

klahd - I've got some Roger Rodgers sequentials that I can post. Flesh never made it past the roughed out stage. But I have a few more pin-ups of him that I could colour.

Francois - I'm not saying I wouldn't enjoy being under a pile of men...but I think I'd find it hard to draw! ;)