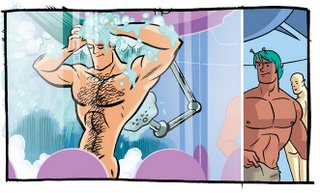 The future of shower technology! We're still using water but now a shiny metal arm with water proof joints gaurantees that your backside is just as clean as your frontside!

The well placed circles (though some might argue that they are poorly placed ;) are a swipe....homage that I got from the movie Danger Diabolik. There is a shower scene which begins with the lovely Eva carefully protected from indecency by two strategically placed decorative circles. The camera pans over to Diabolik, also showering, with only one privacy circle prudently placed. Such a tease!

Diabolik is played by John Philip Law...who played the near naked angel Pygar in Barbarella! He's in top physical form in both films.

Incidentally, that's Roger Rodgers in the shower with unamed aliens admiring the view.

Does that shiny metal arm have other attachments that it can use on your backside?

Those damn circles look like the stickers on CD sleeves: "Beware, adult content".
I don't know why I'm saying that.

Sooo... did you draw your Shower Roger first and then apply circles, or did you draw the circles first? Just out of curiosity...

Bet he has that clean, soapy smell afterwards. Is the hot alien going to hand him a towel? You never know - soap may get in his eyes.

Not to be a big ol comic geek but the character Diabolik was actually Grant Morrison's inspiration for Fantomex in his New X-men run. Eva, Diabolik's sexy sidekick got 'translated' into E.V.A., Fantomex's independent central nervous system. Betcha didn't know that, huh?

Anyways keep up the grand work.

Klahd - Sure, the metal arm attachment also has a foot scrub, shampoo dispenser and will hold your coffee. That's what you meant, isn't it?

Francois - Roger was drawn nude first then circles added. Why do you ask? ;)

Voltaire - Thanks. I didn't know about Fantomex. That Grant Morrison...he's nutty!

Actually, the name "Fantomex" is a play on "Fantomas", the inspiration for Diabolik. Fantomas was a French pulp character from around the end of the XIXth/beginning of XXth century. He was a bad guy, too.

Look here: http://en.wikipedia.org/wiki/Fant%C3%B4mas and here: http://www.premiumwanadoo.com/fantomasfr/Fant007.htm for great art for the early novels.

And, Bone, shame on you for making think about the circle-less drawing sitting somewhere in your computer.