In June I mentioned that I got a few pictures of some Pride hotties. This guy was especially delish! To me, anyway. He had that perfect combination of confidence, tight jeans and questionable sexuality that I like in a guy. And nice hair, too. 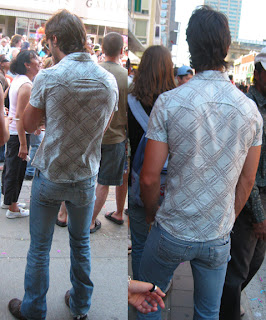 I tried to capture all of those admirable qualities in my drawing...but since I feel like you might also like to see the real deal I'm including a few of the pictures I snapped. My first photo post (I think).
In other news, my trip to San Diego has come and gone. Lots of fun hanging out at the beach and the Comic Convention. Although the latter is insanely out of hand lately. The convention is tremendously huge making it near impossible to see everything. In fact I missed more than a few of my friends because I just didn't have the energy to navigate through the crowds. Fortunately most conventioneers know which bar to hit after the con and I saw my pals there. If you're ever at a convention where Phil Jimenez is a guest make sure to stop by and say "Hi" to him. Phil is one of the nicest guys in comics and I always love hanging out with him.
I also met Mark Andreyko, writer of DC's Manhunter. Also a great guy. I sort of announced during Darwyn's spotlight panel that I'm going to be working on Jett Vector after we finish with our final few issues of the Spirit. I'm pretty excited to be doing a creator owned project again and can't wait to unleash Jett on the publishing world!
Hope everyone is still having a great summer.
best,
j.
Posted by j. at 4:04 PM

Nice to see the source of your inspiration and the finished product. Great job!

Sigh! Would have loved to go to the convention but it is so far away - I feel so isolated here at the tip of Africa. Maybe next time...

Ah, pride hotties. I saw more than my fair share at Europride in Madrid this year. I took a lot of photos, too, and you may enjoy them. :)

There's some tourist stuff in there too, but you'll soon get past it to the abs. (But as I say in my comments, I ended up crushing most on the parks maintenance guy.)

Very cute drawing. Showing him from behind gives him an air of mystery.

I'm sorry to see that you'll leave The Spirit. You and Darwyn Cooke make a great team.
But I'm so glad you'll do a Jett Vector book. Any publisher to announce? I'd see you at Oni.

Rudy - It's a big trip to make Africa to San Diego! It's a fantastic convention, no doubt, but I don't think I'd go if I weren't so close (5 hours plane ride...which is just about all I can handle). I wouldn't be surprised if there are some who rather visit your Africa than go to San Diego :)

Andrew - Thanks for sharing the pics. Isn't it so true...Pride gives us all that eye candy and we'd rather check out the maintenance crew. I have a shot of one of the street cleaning crew that is my favourite from the day. He's dreamy!

Francois - Thanks for the kind words. I don't yet have a publisher for Jett...but I'm looking to find someone with bookstore distribution. And perhaps even the European market (like Gmunder).

Are you telling us that Jett Vector is going to include explicit sex scenes? :)

Hi, I was met your blog yeasterday and I already a Big Fan!
Wow! I love your draws with superheroes, their so hot!
Like you I'm a big fan of colossus and capitai britain. Alan davis's Brian Braddock is very hot with his pijamas and fur chest!
I really love the ultimate colossus been gay! and i think he have sex with wolverine, but their never show us! Damnit!!
can you ost this image large?: JLA_LockerRoom_clr.jpg
see u
I'm from Brazil
J too
fazeramor@yahoo.com.br

Hi, I was met your blog yeasterday and I already a Big Fan!
Wow! I love your draws with superheroes, their so hot!
Like you I'm a big fan of colossus and capitai britain. Alan davis's Brian Braddock is very hot with his pijamas and fur chest!
I really love the ultimate colossus been gay! and i think he have sex with wolverine, but their never show us! Damnit!!
can you post this image large?: JLA_LockerRoom_clr.jpg
see u
I'm from Brazil
J too
fazeramor@yahoo.com.br

hummm, another sexy hero it turn on my mind it's robin , dick grayson, in classic uniform without t-shirt. hehehehe
congratulations!!!

J. from Brazil - Many thanks. I'll repost that JLA locker room scene again...it seems to be my most popular post having spawned a toy line :) and shown up on a few MySpace pages.
I'll have to work on a Robin drawing...I always loved Neal Adams redesign of the costume and the animated series variation. He'll have to be age appropriate, though!

Thanks for the kind word regarding my comic. I'll let you know when it's available.