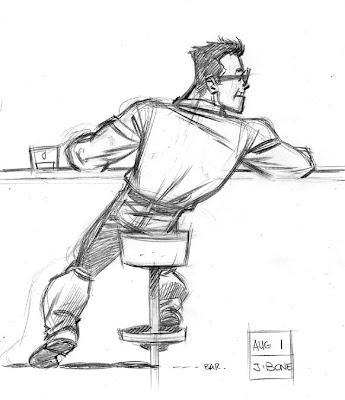 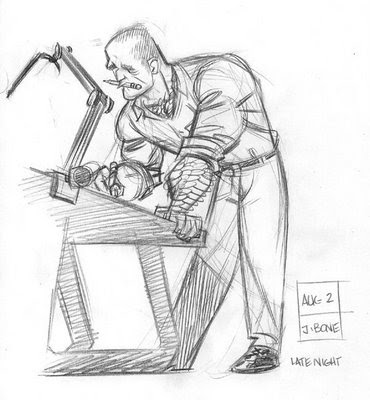 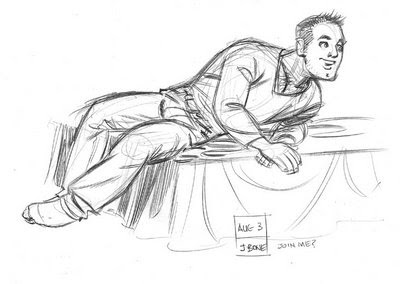 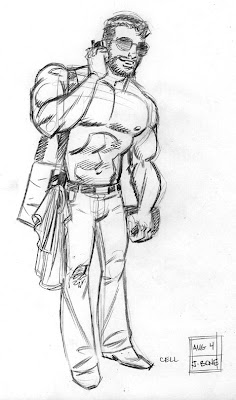 A couple of these are based on real people I know or have seen around town. As Autumn approaches clothing layers are added and it becomes more difficult to appreciate a person merely for his/her physical appearance. The artist must imagine peeling back the additional layers of clothing in an attempt to discern attractive surface qualities. The secret glimpse of skin becomes more and more difficult to find as thicker underclothes are added to the daily wardrobe. Those extra bumps and bulges may simply be an extra fold in a pair of thermals.
Take heart -- though it is Fall out my window on my drawing board the season remains Summer. I've only just begun August. The Olympics are a few weeks away. Warm weather prevails. Such is the benefit of falling behind in my duties.
best,
j.

These drawing of mostly clothed guys had an interesting effect for me: I did look at their faces more than usual (not my fault if you draw smoking hot male bodies), and I noticed how varied these faces are, as are their expressions. I especially like the first two.

Even though the first three drawings depicted well built guys fully clothed I was grateful to see the fourth guy barechested. Despite what the Board of Tourism would have you believe, we can't wear shorts and trunks year round here in L.A. The trees drop and warm days become the ocassion. That's why I'm glad it's still August on your drawing board. It'll help until we get that first batch of warm days in the spring and Winter-built, untanned muscle goes on display again. In the meantime, I look forward to the scantly clad, rock hard torsos that spring from your pencil. Thanks, I realize it must be even harder in Canada.

Funny, that Francois mentioned the faces, because thats always the first thing I notice. The character is either facially engaging to me or he isn't.

1 and 2 have a great retro feel to them. The angles are so nice and clear cut on the bar guys head, neck, and face. Lots of little rectangles.

3 has a nice soft quality, including the thick socks, but it does beg the question...

why isn't he in pajamas or a robe?

Two classic looks that are missing from your Guy A Day portfolio.

Francois - Ha ha! Thanks, man. I kinda thought the second guy seemed a little goofy when I drew his face. But then I sometimes like the goofy guys... :)

Musclsvg - Indeed, I remember a very chilly convertible ride I took one L.A. late summer night. I hadn't worn a jacket and a half hour into the ride desperately wished I had. In fact, drawing number three is loosely based on the owner of that convertible. He did not, in fact, ask anyone to join him.

Javier - I won't say that I look at faces first but a nice face is most definitely a deciding factor in my overall attraction to a man. Mainly, if he can't manage a smile in conversation I look elsewhere.
As to your question...I will definitely have to remedy that. I love a good terry cloth robe and/or pajama bottom.
One of the first bits of "erotica" I could find in my small town was a catalogue from International Male...the pajama and underwear section were obvious favourites. Oh, what would we small town boys do without underwear catalogues and the occassional glimpse of a man's butt at the public swimming pool! *sigh*