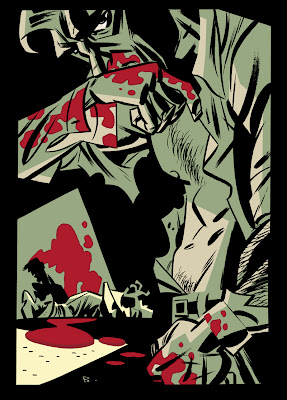 This month, July 22nd to be precise, the adaptation of Richard Stark's (aka Donald Westlake) first Parker novel "The Hunter" is released in better bookstores and comic book shops! It's drawn and adapted by my buddy and superstar artist Darwyn Cooke! Over on his "Almost Darwyn Cooke" blog (click his name) blog supervisor Cal is running a cool draw Parker contest. This is my entry!

The guy's a pretty ruthless character, from what I'm told. The books have been adapted a few times in film...I cribbed this list from The Violent World of Parker website:

Check out the site for reviews of the films. Darwyn's done interviews all over the net about the book and his favourite screen versions (see above blog link). I'm pretty darned sure that the Lee Marvin Point Blank is considered by Cooke as one of the better movies based on Westlake/Stark's work! I tried for some of Marvin's meatiness in my own drawing...but no one beats Darwyn for drawing tough guys! From Slam Bradley, to Stark (a character in SELENA'S BIG SCORE, who looks more than a little like Lee Marvin) to Flagg and many of the old-school superheroes in The NEW FRONTIER Cooke draws men with weathered faces and hands like meat-mitts!

Freaky and scary as hell but also so sexy at the same time. To run away from him or to clean him? that's a dilemna.
All the men Darwyn Cooke is drawing are attractive, that's his curse :p

I was at the Museum of Art today and saw a brand new paper doll book. Here is a link for the authors website.

If that leather daddy (in the previous post) isn't a paper doll, I don't know what is.

Perhaps its time for a paper doll comeback!

Xavier - Me? I'd back away slowly and then run. No way I'm cleaning up all that blood.

Javier - Thank you for that link. Miss Mindy's art is lovely. I especially like her custom vinyl toys...would love the little man in the moustache!

And I think you're right! I need to do some paper dolls. I always wish I were more non-traditional in my thinking. Miss Mindy has such creative looking paper dolls!