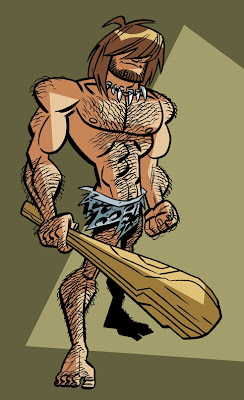 I think cavemen are hot.

Great sketch! The two things that have always eluded my Halloween experience are: a toga party and a caveman costume. It's a shame that the holiday isn't in the warmer months of the calendar. That way the costumes could show more flesh like they do during Carnival in Rio. This guy would fit right in. Most caveman disguises are a tubular one shoulder tunic. Boring! How hot would it be to encounter this stud out trick or treating. His leopard loincloth displaying a hot, very bare and hairy physique of "pre-historic pumpitude" and some serious wood. Oh!, the club is a nice touch too!

P.S.: The bearded square jaw and wry smile on this guy are very similar to the way you've drawn yourself here. Could the hair over the eyes be meant to disguise you from your loyal followers?

Musclsvg - Usually the cave man schtick is more along the lines of Fred Flintstone. I thought I'd go with a barely there bikini brief and giant club!

I might be as hairy as this guy but that's where all similarities end. I in no way have a square jaw and am certainly no where near as built as this cartoon man!

I'm flattered by your image of me, Musclsvg.

Along the whole "costume" shtick, these guys just seem a bit too "perfect." As if they got their outfits from central casting.

Perhaps if the costumes were a bit more obviously home made?

You know, like a tablecloth (or curtains) for a cape and a lioncloth made out of a towel. Like a homemade Superman costume. I know its a tough order, but I know you can do it.

Also, part of the charm of Halloween is when a costume goes against the person who is wearing it. Like a tough guy in a bunny suit or a nerdy brainy guy as a superhero.

Couples would be fun too.

Ah cavemen, you decided me, I'm gonna try to make a caveman week on my blog.
Ah, if only you would draw hairy Tarzan ongoing serie...

that's a totally homemade loincloth.
cause Mr. Bone worked on this at home?

Javier - I get ya. Vlad, especially, is very much a store bought cape (unless you are the owner of a sewing machine and can make your own blood lined cape). I'm very much of the "shop at second hand clothing stores and make your own accessories" mold of Halloween costumer. I'll try to keep in mind the homemade-ness with the next few outfits.

Oh, as for different body types...you may have already noticed that I'm being a big ol' cheater and tracing off a standard body to which I add the costume. Doing that saves me a little time sketching these up.

Xavier - A hairy Tarzan ongoing would be fun, I think. I look forward to your week of cavemen!

VJ Spivey - I did indeed. Ergo, it is a home-made costume :)

Grifter Wolf - That makes two of us! I've always wanted to be a Wolfman for Halloween but can never find a satisfying way to make my own costume. In high school a kid came to a Halloween party as a wolf man. His mom stuck the hair to his face and hands using corn syrup. It looked good but I imagine it was a sticky mess to clean up. That, and bees wouldn't leave him alone!

Actually, the fact that the poses are the same add a fun factor to it, it seems they're from a catalog of sexy Halloween costumes.

That being said, his over-the-eyes haircut make him look like a modern teenager...or maybe cavemen teenagers were already very hairy. Think of the adult ones, then!

He seems to be a sexy symbiosis of Bam-Bam and Peppermint Patty, very close to my very first "official" boyfriend. I think I was always turned on by hairy shaggies like this - thank you!