You're an Animal, Man! 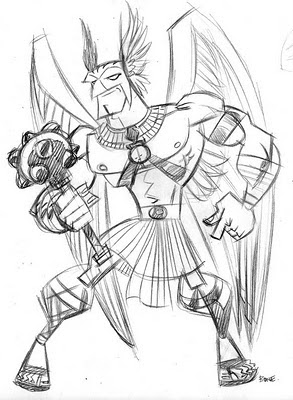 Hawkman is one of those characters I've always wanted to draw in a comic book story but have yet to get the chance. I think he must be a tough character to get a grasp on...so tied up is he with his past life/next life history. I thought it'd be fun to draw a story with his great, great, great ancestor back in the days of Egyptian pharaohs when animal headed Gods ruled! 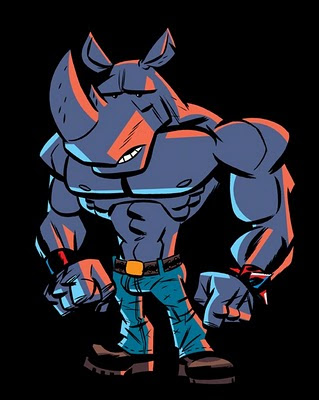 Speaking of animal heads...this guy I drew after a night hanging out at Woody's! For those of you who've never been there, Woody's has a rhino head mounted in the main stage area of the bar. An artificial rhino, mind you. He's kinda the mascot of the place. There is also a wall/showcase full of rhinoceros knick-knacks. So I wanted to draw a cartoon hunk of rhinoceros beefcake who I might one day pitch to Woody's management for use in advertising or something. He would, of course, be named Woody!

Speaking of Woody's, I've lately found myself with much greater confidence when it comes to simply starting conversation with guys I think are good lookin'. I haven't reached the point yet of asking anyone to pose for me...but I'm off to a good start :)

Nice Rhinoguy. Who would not like a ride?:p
I would have thought that starting conversation with strangers would be way more difficult than asking them to pose for you. I mean, that's a nice thing to ask, you compliment them only by asking and it's unusual without being freaky.
Happy new year!

Man, I would have had a WAAAAAY better time with you last night. It ended up being kind of a nightmare. Glad you got a chance to sketch a little and I am looking forward to seeing the rhino next weekend. Also to seeing you in action with this "confidence."

Love the Hawkman. You're tops in the fun re-design department, J!

That is the PERFECT Hawkman costume!

That Hawkman is SO AWESOME! You gotta do a finished version, J!

Xavier - Maybe it's the way I ask that makes it freaky? Maybe I should stop making the request in my terrible Jerry Lewis impersonation.

;) It's not always easy simply talking to a stranger, either. Some nights I just feel bold and when that feeling is there I go for it.

Grapestain - It was fun! Sorry you couldn't make it out.

Michael Cho - Thanks, Mike. I just saw a Hawkman drawing done by James Tucker for the next season of Brave and the Bold and I want to steal his wing design! It's pretty cool.

Luc - Thank, guy! I imagine him as an actual God inhabiting a man's body and I'd do away with the silly Nth metal flight business. I don't even know what's supposed to be made of the Nth metal anyway. His wings? His harness? Silliness!

James - Thanks. I definitely want to ink it up and color 'im. Like I said to Mike I think I want to give the wings a once over as well.

I think you are looking at the whole "conversation starting" thing backwards.

I think you should be more obvious about the fact that you are sketching people in the bar. Then OTHERS will do the approaching.

And all the cute guys will get upset if you DON'T sketch them.

I agree with Javier!

What about having conversations in bars with guys not-as-perfect-looking? I'd love to buy you a drink the next time I'm in TO and visiting Woody's...

I could see the drawing you made of Woody being used in their ads, on T-shirts, hats, etc! I’d buy one (or more)!

Javier - That has actually happened. Sometimes it's the friend of the guy I'm drawing who approaches me to see the sketch. I'm often nervous about that lest my drawing not meet the approval of the "drawn". People have an idea of what they look like and may not like my interpretation.

But I try to not get bogged down in that line of thinking :)

Lou - There are those who might argue with my view on who is or isn't good looking :) It's actually a conversation I find fascinating. I've drawn guys that others wouldn't consider good looking. I've also drawn guys I think are interesting looking, but not necessarily my "type".

I should develop some of those drawings into complete images. Odds are pretty good they'll be someone else' type! As my buddy Darwyn says, "There's a seat for every ass."

;)
Thanks for the input, guys. It inspires me to push myself out there more and more.

Lou - Let me know next time you're coming to T.O. We can certainly grab that drink.

What does it matter if they don't like your version of them? Take an eraser with you and then give them a smaller nose and higher cheekbones. At least you will have started the conversation, which is the point anyway.

Make sure you wear a jaunty hat.

Javier - Sporting a jaunty hat has been known to increase a man's boldness! I shall take it under advisement! :)

I'm sorry to be weighing in so late on this posting. So many good points have been made all ready. I have to agree with:

-Hawkman should be finished. It's Fantastic!

-Woody's would be fools not to use your RhinoStud for promotion. The orange backlight really makes his shoulders, arms and horn pop and the blue underlighting on his thick broad pecs is hot!

-Just be you at any social situation. The talent you've displayed through your drawings here shows you're a talented, outgoing guy and concerned with others

I'm wild about the half man/half beast art here. Very reminiscent of "The Island of Dr. Moreau" How about a week of these "animales" to kick off the new year? It could be "The Blog of Dr. Bone"

Hope your holidays were great and that new year is full of terrific things for you!

Rather than THE BLOG OF DR. BONE, wouldn't it be THE BLOGLAND OF DR. MOR-BONE?

The animales are fun, but I am still waiting for a Roger Rogers paper doll or better yet Mike Rowe from dirty Jobs.

Musclsvg - Glad to hear the Rhino coloring works...I was trying to get the feeling that he was in a bar despite there being no background drawn. Cheating through color! ;)

Javier - Ah, the paper dolls. Yes, I keep forgetting to finish the Roger doll I started years ago. Better to just start over. And a Mike Rowe paper doll would be fun! Just drawing all the dirty, cruddy clothes would be a blast.

Your paper dolls are always terrific. You always include interchangable wardrobe. Drawing the cruddy clothes for Mike Rowe is bound to be fun. Plus,there's the added bonus of seeing the undressed Mike in his skivvies. Just one request: No boxers/boxer briefs. Low rise, high on the thigh, hip briefs to show off his package. We all know he's packin'!