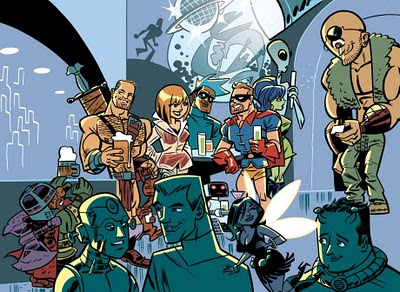 If you live in the Toronto-ish area check out the newest issue of SPRINGPLAY! I drew the cover image and a four page comic. This issue celebrates all things Geek. On the cover I needed to show the various "interests" which can find one labeled a "Geek" -- sci-fi (my own personal geekness), fantasy, comic books and manga/anime specifically. The characters are all loosely caricatures of members of the magazine's staff.

The editor, Jeff, (who is also a close friend and the barbarian on the cover) came up with the concept of a universal bar where the Geek is king. The final image includes a model posing as Geeky bartender, as well as a cute bouncer questioning the credentials of the one-eyed giant!

I read the issue last night and really enjoyed the idea of Geek being Chic! And not just the external aspect of it! With the popularity of Buffy, Battlestar Galactica and Avatar there is almost an acceptance of all things which, in the past, would have earned you a beat-down (probably still exists on the grade school level...but that's just part of growing up).

Being Gay AND a Geek in high school (though I was not out as a gay, I was certainly known as a geek) didn't get me beat up but it definitely led me to being a loner. Not that I minded at all at the time. I was left alone to my science fiction, Doc Savage, comic books and drawing. And now I make a living doing exactly those things (Doc Savage will happen one day).

I invite you to share your own stories of growing up Geek in the comments. And be sure to check out the issue! *Which you can download by clicking the SPRINGPLAY link! Thanks, Javier!

Really great cover art Bone! Editor Jeff's concept and your execution synergized into a fantastic final product. "Springplay"'s staff looks like a really great group of party-ers and Editor Jeff appears to be a real quality hang. Could we see more of him? He'd be a great brainy, buff scientist in Jett Vector's galaxies or a buff botanist or alpha male athropologist lost and pursued by a hostile tribe in Lord Rim'ah's jungles. He's all ready a hot barbarian which could work well too.

I only wish I'd been a Geek in high school. I belonged to the lowest strata of secondary education: Music/Drama. The Geeks were revered for their smarts, while we were just social outcasts giving off an "I don't care" attitude. Now "Glee" has highlighted kids with a talent that they're trying to develope. That could have come a whole lot sooner! There is retribution though. Recently I was looking through high school year books with some friends. It occurred to us that we were known for doing something other than just be popular.

Well, I was on the verge of asking right when I saw the cover who the barbarian was supposed to be but then you provided me with the answer. Wel, well, well, this Jeff sure look like an interesting guy! :p
Sorry, I did not really grew up being a geek, except a comics geek, but an entire generation of boys my age did so so it wasn't really a geek thing and we kept it mostly private instead of sharing it.

Musclsvg - I always wanted to be involved in theater but had neither the nerve nor the natural talent. The idea of subgroups within an already put-upon section of high school kids always disappoints me. But it was true. There were definitely levels of nerd acceptance.

I went to a high school where the theater group was quite well thought of. Although I'm sure there were kids picked on who I didn't know. I was, happily, always left alone. I think in part because I had an older sister at the same school, and because I could draw.

Xavier - I think I was oblivious to my own lack of "cool". I openly read comic books, loved the Simpsons (which was not the gigantic hit it is today...it was still part of the Tracey Ullman show), read sci-fi and drew superheroes. I'm thrilled that kids today can actually be openly gay in high school (in certain parts of the US and Canada, at least). Though I took Home Ec. all through high school, I wouldn't dream of being openly gay at the time. Not in my small home town.

Lou W - It's true! There wasn't the "geek" label. Loner seems to sum up all the levels of nerdness. Whether you were a theater geek, member of your own sci-fi club, or secretly jerked off to the men's underwear section of the Sears catalogue you were a "loner". :)

Thanks for the stories, guys. One consolation has always been that high school seems inconsequential once we reached adult-hood. I remember kids in College struggling because they were once the popular kids -- and unless you excelled at art the fact that you were "popular" mattered little. Wearing a "Polo" shirt in art school does NOT make you automatically awesome :)

Why did you limit it to people who live in the Toronto area?

Javier - Ah, thank you. I knew that and meant to add that fact after all my other blather -- and plumb forgot.

I will add that bit of info to the post!