Recently it came to my attention that a guy named Edward Wihnan had been stealing my artwork. In fact he'd pretty much used every drawing I'd ever posted on my blog. In some cases he'd used the same image multiple times. He'd cut and pasted parts of my drawings together to form his "new" images. He put different heads on my drawings, reversed, re-scaled figures and called it all his own.
I found a Deviant art page, a Tumblr, Facebook, Twitter and a RedBubble page (where he sold shirts with my re-purposed art as well as a few other swiped artists). They're all gone now. He's removed everything -- or found ways to hide himself from my searches (blocking me on Facebook, for example). He goes by the name "Uncle Deadward" on most of those sites.


Friends of mine have gone through this before. They've been swiped and the thief has been caught, shamed and disappears, usually without a word from the thief. Twice I wrote to Edward Wihnan -- first to warn him that I was about to post what I'd learned on Facebook and second that I had snagged all of "his" images. I also warned him that I'd written to RedBubble and that if any money was made from his stolen work I'd be expecting payment. 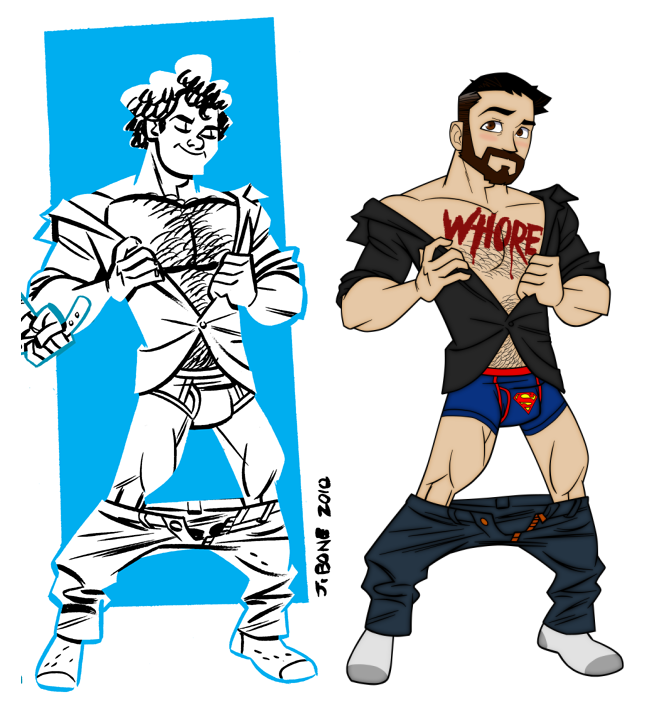 Above is my drawing and Edward's (completely unretouched) version. I love that he painted himself with "whore". It should read "thief" because he gives whores a bad name. Incidentally, that face is how he portrays himself in his diary comics.
Below is a screen-cap from his Deviant art page explaining how he came up with his idea for the Spider-Man butt drawing. In a later comment he mentioned how he could "draw butts all day". My butts. He's drawing MY butts!

So I was pretty enraged the day I discovered all of this -- put together the compilations you see here. There are many more images. Many, many more. But these were the ones where I knew the source material immediately. Some aren't 100% figured out. Like the Spartan image, for example. I knew the face of the last guy but not the body.

I apologize for not updating my blog all that much lately. Don't think that discovering I've been swiped will deter from posting. I'll be keeping an eye out for the return of Edward "Uncle Deadward" Wihnan. As I say, he's vanished from the net. But he'll be back. Oh, he also claims to be a photographer but I suspect that, like his "art", is a lie. 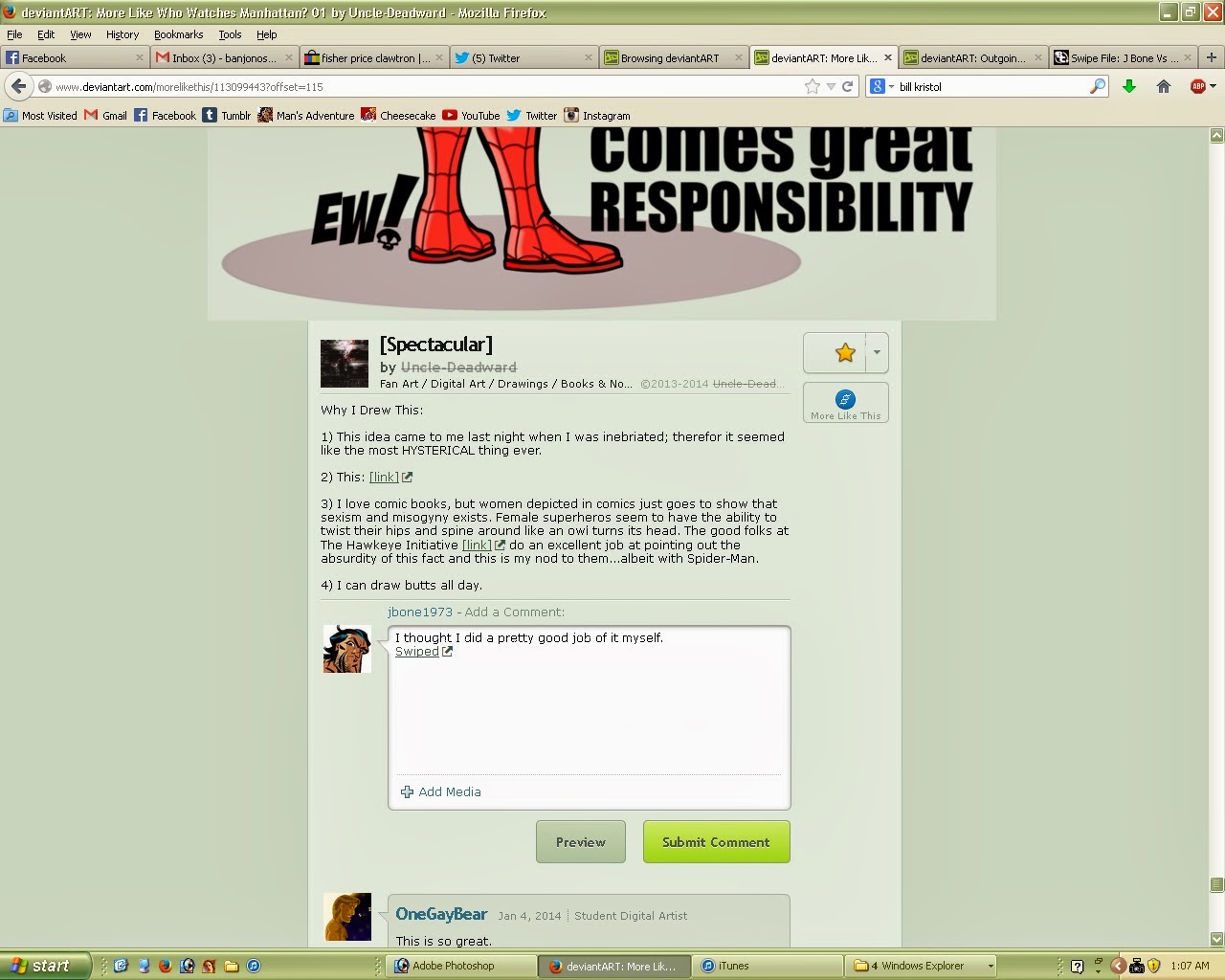 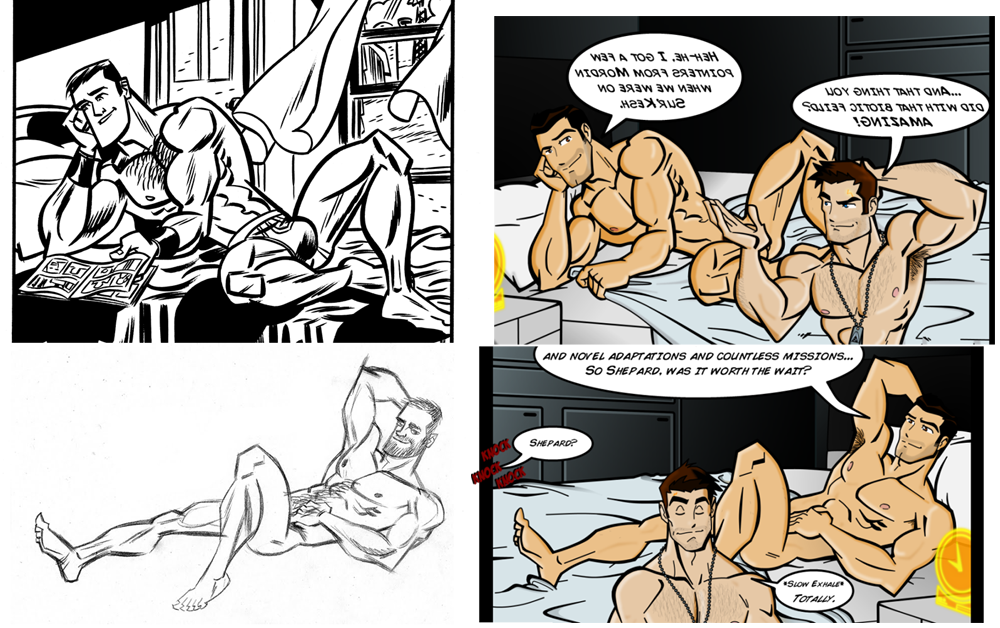 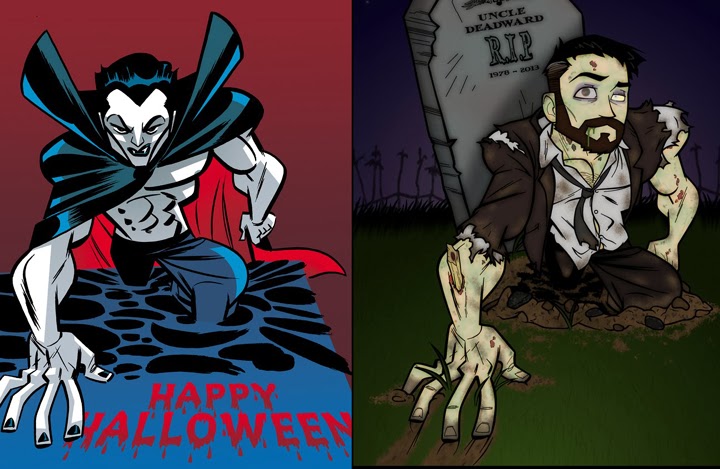 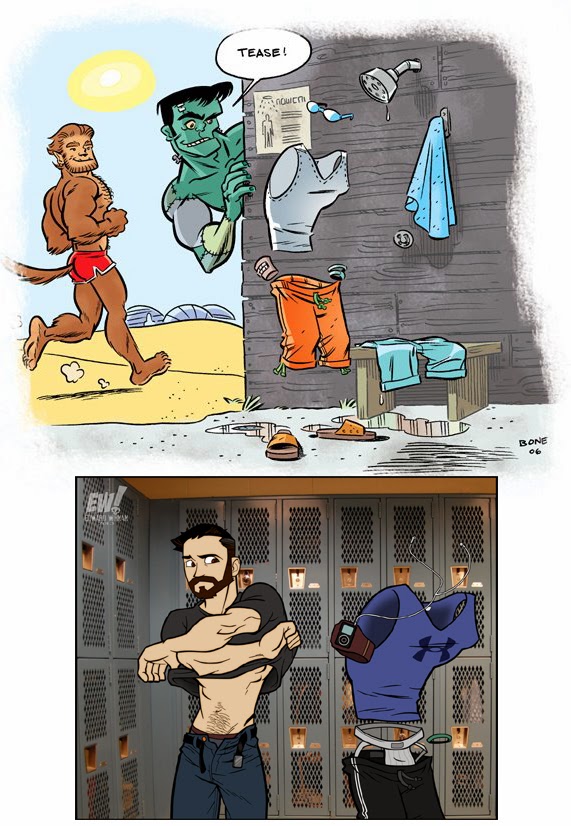 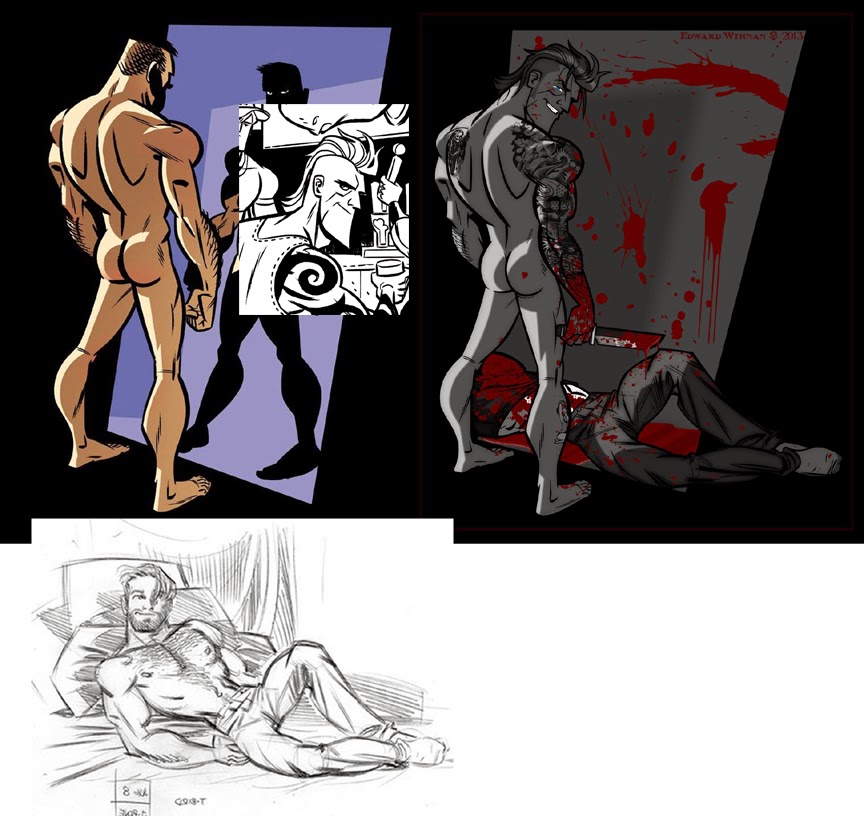 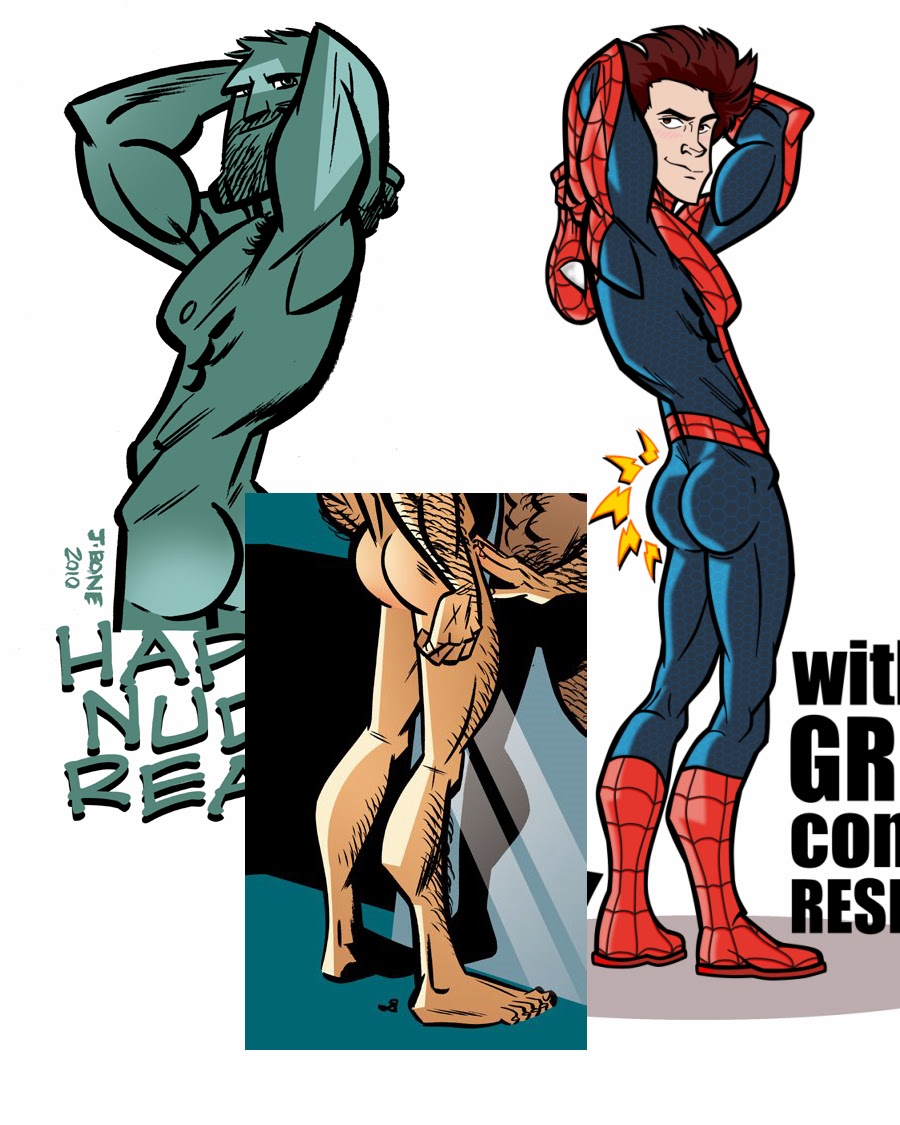 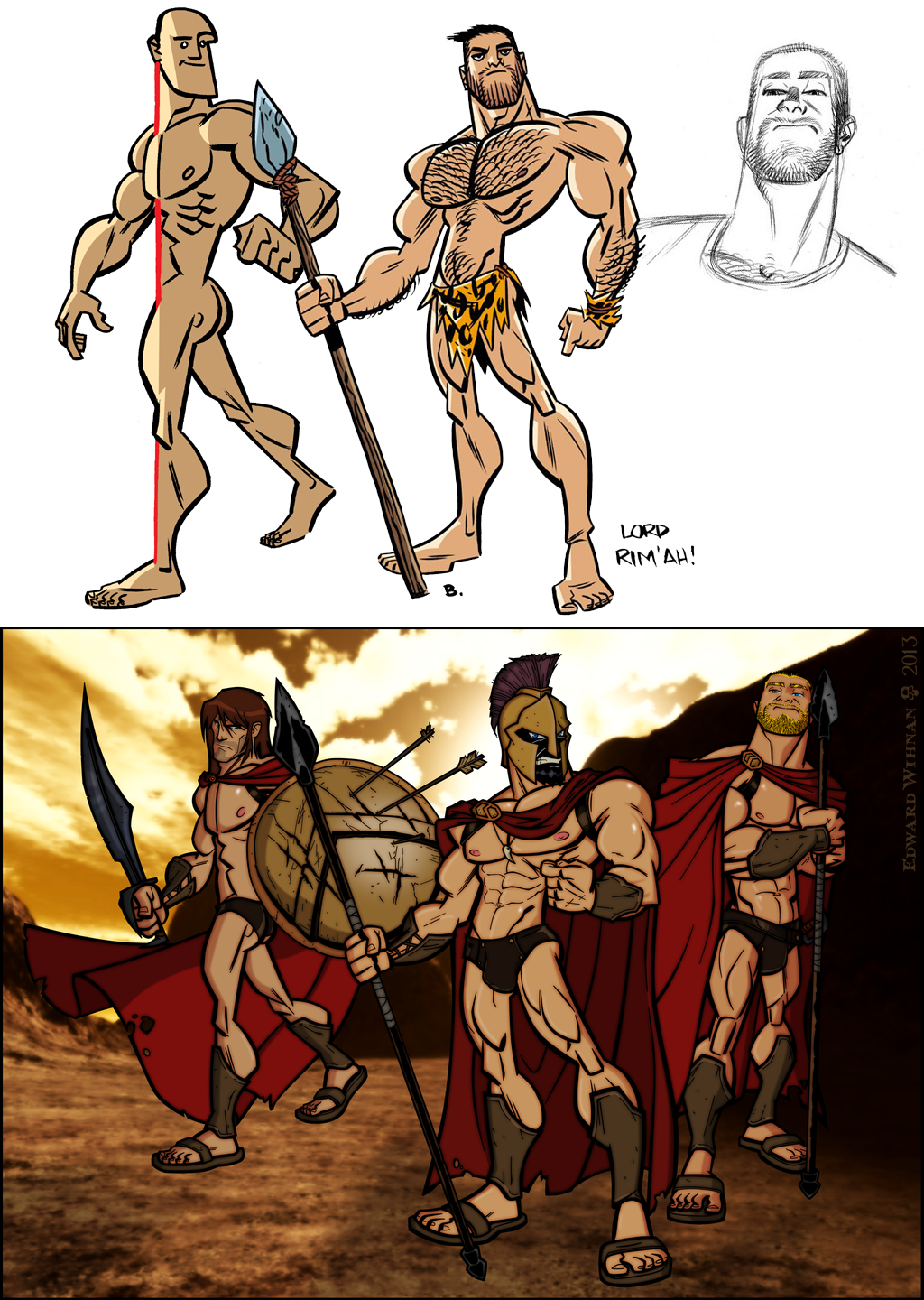 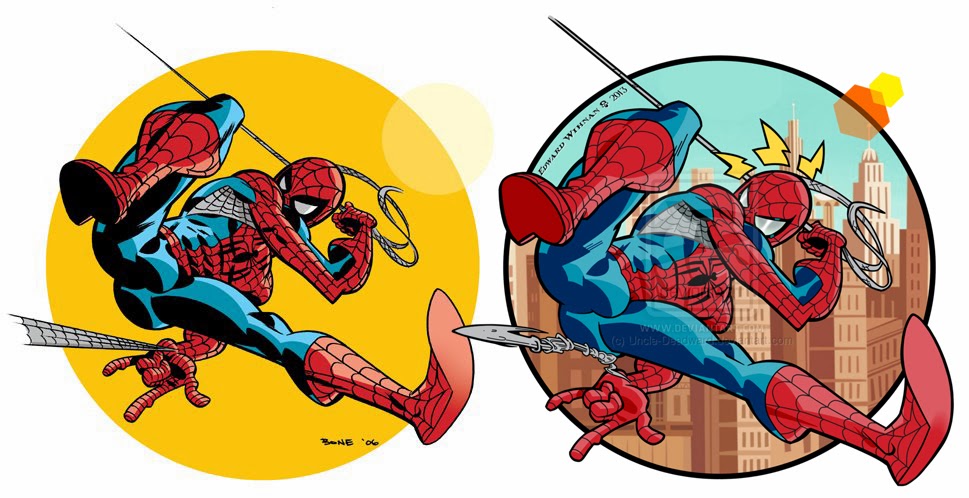 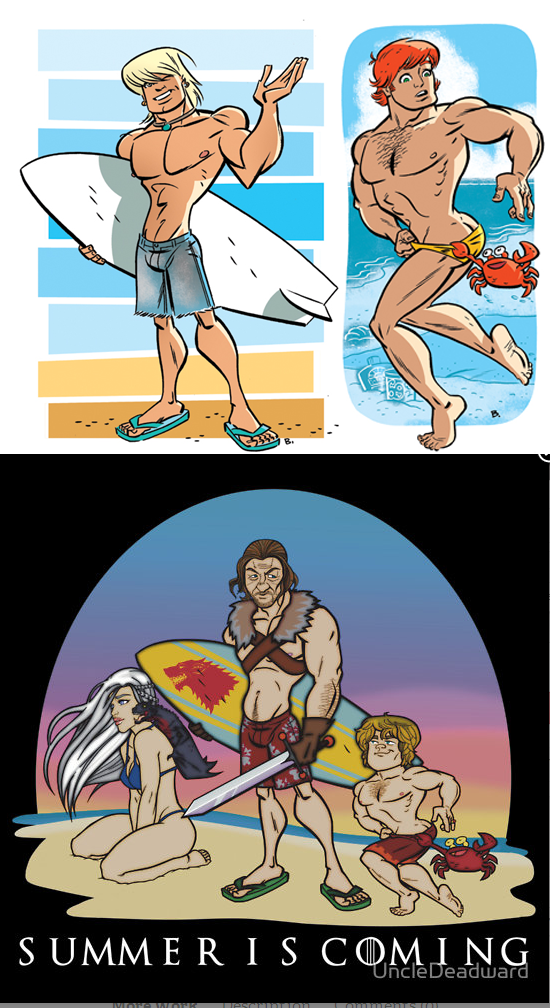 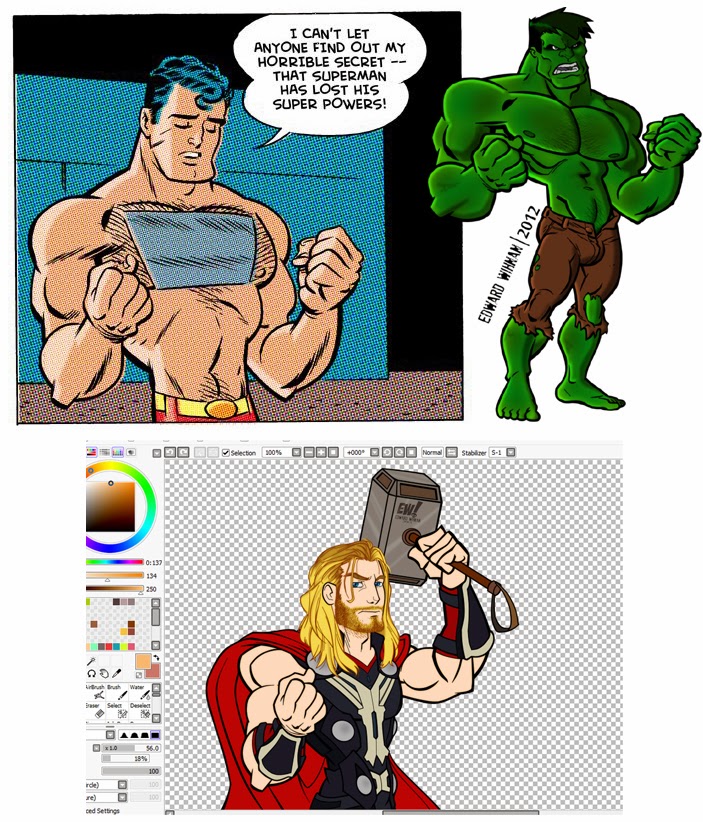 I don't know which is a worse "artist sin." The Spiderman where he pretty much just erases your name and writes his own or... the "Franken-Bone's, where he takes pieces and re-arranges them. I always think of The Red Shoes when it comes to plagiarism. A composer has his work stolen by his teacher. When he wants revenge, the director of the ballet company asks him if it is more disheartening to have his work stolen or to be the person who HAS to steal work in order to achieve something. Personally, I would string someone up by their thumbs and eviscerate them publicly, but it is nice to have that little voice in the back of my head to temper things.

Ugh. I detest people like him with limited talent and even less integrity! I'd be pissed too. I'm always pissed when I see my work swiped.

I did see some "his" art in DA. Now that you've posted them together I can see the art theft, but I didn't notice at the time.

I feel for you man, its outrageous! also it is on a slightly different not, it made me think of the into for black sails and how its just a plane rip off from Kris Kuksi work. how can you expect restrained, when even the commercial world treats your work like common property?

Javier - Public shaming takes care of the evisceration for you. But really I don't think I'd be content letting a person steal but knowing that deep down they might possibly feel some shred of guilt and shame over their own lack of talent. In my experience with people who steal, they lack the gene for experiencing shame and guilt. I'm convinced that in his version of the story Edward Wihnan is the victim. I have unjustly attacked him for paying homage to so many of my drawings. I should feel flattered.

George G - It's not a good feeling. Not even close to flattery.

Alex - A couple of stolen images and I would have just said "Hey dude, not cool." But that Deviant page was nuts. Even in his diary comics he'd swiped from me. Very troubling.

Thanks for comments, guys.
J.

I should clarify, in my comment to Javier I'm writing how Edward might see the situation. I probably should have put quotation marks around "I have unjustly attacked him for paying homage to so many of my drawings. I should feel flattered."

I really would love to know how he tells this story to his friends and family. How does he explain why he doesn't draw anymore.

I shouldn't be so interested in Edward Wihnan's personal life, but I am.

I saw his work too and the "similarities" were just too close. I even sent you a message on Tumblr with a link to a "Masters of the Universe" selfie that he posted. What he's done is reprehensible to both you and your fans. We know how very busy you are and value your postings. He's not only stolen your art, but your time as well. You shouldn't have to deal with this nonsense. I say nonsense because he not worth the effort to think up just the right expletive that applies to him.

While imitation may be the sincerest form of flattery; making money is forgery & copyright breach. Flog the 'whore'!

Woah! This actually disappoints me. I followed this guy in both Tumblr and Deviant Art, his art looked fresh and his character awesome, little did i knew he was a thief. I think he had actually draw some things on his own (i think) and he's not bad at all, at most I hope he comes again to at least give an apologize.

Howeverwhat - I wasn't familiar with the Black Sails/Kuksi thievery. Y'know what? Not surprising. Sometimes clients want something they can't afford and it's all too easy to find an artist hungry enough to steal for the job.

Msclsvg - I just checked my Tumblr messages. Indeed -- there's your message. There's probably a notification tab I should click so that the messages go to my mailbox.
Expletives are easy :) I'd like to know why? What compelled him to steal? Did he think it was all right? I'd like to know how many people truly believed this was all his work. In his personal life, not online (where every lie is truth).

Raymond - He was soundly flogged and vanished. Shortly after another thief was turned up on Deviant (truly some take the site name literally). The new thief didn't steal from me but eventually ran the same way Wihnan did.

CJ DarkSoul - I believe there were a few images with his own drawings (unless even his own likeness is a swipe). The second time I wrote to him I asked him why he resorted to stealing when he clearly had some ability. Why ruin any chance at a career?
As I say, he vanished. No response of any kind.