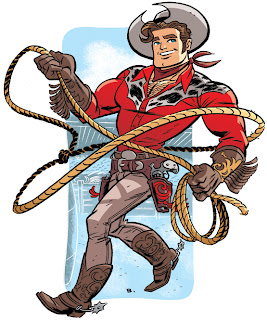 When I draw I like to listen to music that fits the image on which I am working. Usually that means pulling out a few soundtracks from movies with a similar theme (last post's barbarian was inked to the Conan soundtrack, and a collection of old movie music called Now Playing). This cowboy called for a different sort of music. Thanks to Mr. Paul Dini I was introduced to Bob Wills and the song Roly Poly which I stuck in the player alongside Loretta Lynn. I capped off the music selection with a heaping helping of my personal favourite country music star Miss Dolly Parton. Boy howdy, I love Dolly! :)

I think the background to this one would have looked more natural as a brown or tan. But there was so much brown in the costume and lasso that I went with blue. I have yet to go through all of the finished pieces to this ongoing theme but I think so far blue is the most common background colour.

All that western comic work you've done shows up well here! The way you ink the lasso gives it nice depth. The real crisp cut on the hat makes it look kind of like bull horns!

Well, you certainly work on varied themes!
Although that cowboy is too dressed for me :)

He has a sort of Guy Madison quality.

heeey i just find your blog.. is great.. i love your work!!.. do you have any website besides tis one?

You know, J, now that you've posted a couple of matching sets from this series on your two blogs, it kinda makes me wish I could see this stud next to his corresponding filly.

They'd make a great pair — though only as friends, I hope. I mean, this guy's a man's man, don't you think? He wouldn't mind if I grabbed him by the horns, would he? ;)

Just an idle thought — not a veiled request for twelve more drawings! You're busy enough . . .

Thanks again for posting this great stuff. I've started seeking out some of your work at my local retailer as well. Any favorites to recommend?

King Of Hearts - Thanks...and a gold star for catching the "horns"!

Francois - Sorry, my friend. They can't all be nearly naked :) However you'll love the Jungle King when I post him!

Zpeedy - Cool. In each of these drawings I'm making a conscious effort not to draw the same person in different clothing. Guy Madison is dreamy...I only wish I'd thought to intentionally draw him.

Al_rguez - A grand welcome from Canada! The art on your site is fantastic. I love your style. If you check out my profile over on the right you'll find my other blog. That's all I've got online...for now.

Nickel - Never fear, there is a complete set in the works. I'll most likely post a side by side when I'm through...on this blog? I think you guys would forgive me if I posted some women so long as they are accompanied by nearly naked men.

As for my published work, first of all thanks for checking it out. I personally love the work I did on MUTANT TEXAS: TALES OF SHERIFF IDA RED - in it you'll find many a cowboy and my first attempt to really insert some beefcake. The Sheriff in Ida may be a monster but he's a hairy monster :)

SPIDER-MAN'S TANGLED WEB - Issues #11 and #21 both with Darwyn Cooke. One is a fun Valentine's story and the other a Christmas tale featuring the Fantastic Four. Both are available in collections in case you can't find the individual issues.

I just noticed Darwyn has a Wikipedia entry...I've gotta work this year to earn one of my own :)

Hey, Alfredo, your art is wonderful.

Is your theme the zodiac?

Man, you're great! I really like your work, I've been following it for quite some time now...

I didn't know you had another blog (more female-oriented). It was very nice to find that out!! Why don't you put the two together? It'd be nice to see both of them side by side...

I was also wondering if I could link your blog to mine. I'm new to this blog-scene and I don't know if the internet ettiquete requires you to do so. Here's my blog (it's a webcomic, male version of "The Craft"):

J: Hey, thanks for the recommendations. I just found out online that my local library system has a couple copies of Mutant Texas! Woohoo! I've put it on reserve, and am looking forward to checking it out.

This weekend I also may be stopping by a back-issue bonanza sale at a suburban comic store. (As a rule, I stay out of the suburbs, but, you know, for a good cause . . .) I'll keep my eyes peeled for your Spidey titles as well.