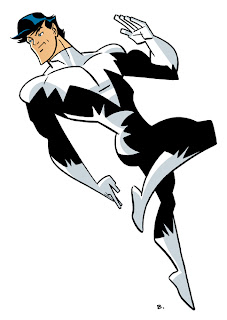 There was a lot of Northstar talk all over the net last week or the week before. Mainly that his recent death inspired Novelist Perry Moore to write "HERO". I'm looking forward to reading the book eventually.
I'm an Alpha Flight fan but gotta admit that Northstar was not my favourite character. He was too much of a jerk. I much preferred Puck and Sasquatch (is hairy men a recurring theme here? :) They were more fun...although as written by Byrne they did have their dark sides. Puck was in constant pain because of his dwarfism and had to meditate daily in order to deal. And Sasquatch turned out to be a creature from another dimension who inhabited the body of Walter Whatsisname. One day I'd love to do an Alpha Flight story or two where the characters just have some good old fashioned fun! I think our Canadian Heroes deserve it!
And in my story Guardian wouldn't be dead yet!
j.

And who is Northstar saying hello to? Hector?

Jerk or not, you've made him look great.

Oh, also, do you mind me asking what you inked this with?
Or to be grammatically correct, with what did you ink this?

Chris Haley - Thanks. And to answer your question...with a brush did I ink this. The ol' brush and inkpot.

Giving up on inking over here... I only succeed in making a huge mess :)

Great art, I like your style. I envy your talents at stylizing your characters, it is something that I still have problem with.

If you would not mind swinging by my blog to look at a few pieces of my art, I would love to have your opinion on them.

Walter Langowski. (He said, from memory.)