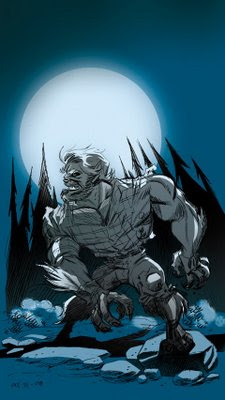 I've come to realize that Halloween is truly my favourite out of all of the Holidays. I'm not so much into candy, but I love handing out treats. I love dressing up in monstery costumes. I love old monster movies...some of the new ones, too. There are still a few that I just can't watch because they scare the bejeezus out of me and I won't be able to sleep. A few days ago I watched the original Night of the Living Dead in its new digitally colored version. It was not nearly as scary as the first time I saw it.

The first time I saw Night of the Living Dead I lived with a roommate who worked a night shift...I watched the movie alone and had to keep looking down the hallway to make sure ghouls weren't slowing making their way towards me. When I went to sleep that night I put a case of books against my door so that no one or no THING could enter. I'm pretty sure I watched the rest of the movies in the Romero series including the Tom Savini directed remake.

And yet I've put up a drawing of a Wolf Man. 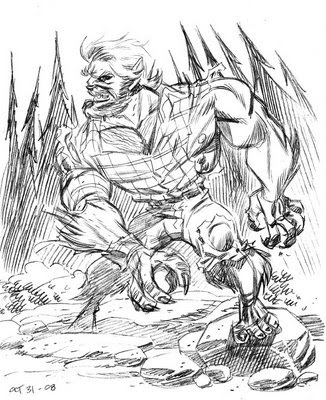 Just once I'd like to dress as the Wolf Man for Halloween. I just don't know if I could stand to have all that hair stuck to my face, though. I've seen good Werewolf make-up but if I ever did it I'd want to look really scary.

When I was a kid I saw a bit of the movie The Company of Wolves. There's another film that scared the crap out of me. The scene with the wolf snout popping out of the guy's face! Ugh! And I carried with me the scene of the werewolf getting its head chopped off and it falls into a vat of milk. When the woman stirs the milk the head has changed back into a man (her husband, I think). It really freaked me out and I'm not sure I saw the rest of the movie. Not until years later when I watched the movie on TV and realized from whence came that horrible nightmarish image!!

Speaking of nightmares, I hope you all have a terrifying Halloween! Don't make yourself sick on leftover candy!

Oh my ! I a&lways feared werewolves as much as i'm attracted to them... You really push a button here, with this fabulous drawing ! You rocks ! As always !

YEAH! I was actually planning on being a werewolf this year... but just couldn't. I opted for something much easier, but I think werewolves are HOT! Thanks for yet ANOTHER amazing drawing.
:))

Logan - Ah, Logan. It is you who rock, my friend. Your issue of Deimos is gorgeous! You draw the best beefy men. I'd love to see a Werewolf comic by you.

Andy - I had a feeling you'd be dropping by, Andy :) We share the same affection for Werewolves.
If you were to dress as a Werewolf how would you do the make-up?

Excellent Wolfman J.! (I was the wolfman once as a kid.... lots of fun!)
Happy Halloween!

I've really got to get this guy inked.

Great drawing. I must admit that I was never that into werewolves until the Fox TV series some years ago. Maybe it was because a hunky guy was the victim of the curse. It was always interesting to see what he was or wasn't wearing when the sun came up. I've also wondered what it would be like if the curse was reversed. What would a wolf look like if the full moon turned him into a man?

It's also interesting to see what arouses fear in others. I think it might have to do with the geographic locale you were in when you first learned to fear things. Having spent my formative years in the southern U.S., I'm more afraid of reptiles. Alligators, snakes and lizards freak me out way more that wolves, bats or spiders.

The Wolfman (and werewolves)were the scariest of the classic movie monsters. Dracula, the Karloff Mummy, Frankenstien's Monster all had thought processes going on. And the Creature from the Black Lagoon seemed to be easily outrun. But the Wolfman had no thought process going on at all. He was just out to kill. I did love Maria Ouspenskaya in the original though.

"The way you walked was thorny, through no fault of your own, but as the rain enters the soil, the river enters the sea,so tears run to a predestined end."

Musclsvg - Which Fox tv series do you mean? I don't really watch that much tv but I think I'd check out a show about a werewolf.
I could see location affecting fear. That makes sense. When I was terrified of Zombies I had just moved out on my own in the big city...so really my fear was of break-ins and crazy/homeless people which we all know big cities are just full of. Having lived in a city for some time now I don't fear the homeless as much :)

Javier - I'm still afraid of Black Lagoon type creatures when I swim in lakes or more open water. I'm definitely a nervous swimmer in the ocean...thanks to Jaws.
Ah, the quote by the old Gypsy woman...so tender and loving and sad. I always feel more sympathy for the Wolfman than fear. He's a victim of his unfortunate circumstance. Frankenstein's monster is the same. Having read the book a always feel like Victor is the true monster in that story. The creature is an abandoned child trying to figure things out on his own.

That Fox series is ancient history. I remember seeing it in re-runs on cable. I think it originally ran in the early 90's or possibly even late 80's. Someone told me that the guy who played the werewolf went on to work on "General Hospital".

Don't be afraid of the Creature From The Black Lagoon. I remember seeing an article about the guy who played The Creature. He was really muscular and would probably have to be to swim in that rubber costume. The article had photos of him suiting up. The real monster was in the basket of his speedo.

Yes, Larry Talbot was a sympathetic character but in his Wolfman persona he would rip your jugular out without hesitation.

As for your fear of swimming in the ocean, I have you beat on that.

I can't swim in a pool at night because the lighting reminds me of the scene in Thunderball where Emilio Largo releases the Green Grotto Sharks into his pool to dispatch Sean Connery. HOw is that for an irrational fear?

Musclsvg - Ben Chapman was one of the guys inside the costume and probably the guy you saw photos of. He was an incredibly hansome fella to be stuck inside that rubber outfit. I saw him once at a comic book convention but lost all nerve about going to meet him. I tend to become a blathering idiot when meeting favourite celebs.
Thanks for the Wolfman TV info.

I remember that Werewolf series, I used to watch it mainly for the often undressed main character, too, whom I found really cute when I was a teen.
Although I was terrified of werewolves.
J., here's a site about it: http://www.werewolftv.com/main.html and it can be seen at http://www.joost.com/07200mz/t/Sony-Pictures-TV-Werewolf

I can sympathize Javier, but Emilio Largo and the Green Groto Sharks can fend for themselves. My irrational fear is that I won't bump into Sean Connery if I swim in a pool at night.