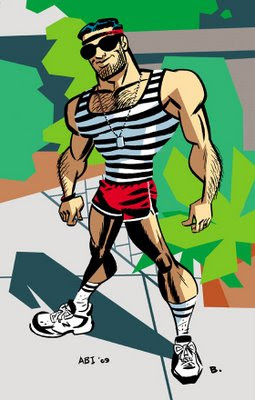 I was reading Alan Bennett Ilagan's blog the other day. Alan had just attended Albany's Pride parade and posted pictures including a few of his Pride outfit...which I I think looked great (which is why I wanted to draw it). He was mocked for channeling Richard Simmons and/or Olivia Newton-John. I think the outfit was fun and slightly sailor-ish (it's the striped shirt, I think).

First is the drawing with just the black line art and the abstract Photoshop drawn background I based on the original photo ref. I drew planning on coloring all of the line art which is why you get such heavy shadows on his legs and shorts. 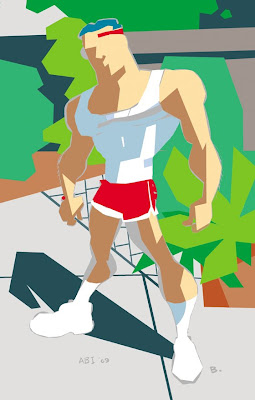 Here's the color only layer. After that "accidental" Josh abstract I checked out the Alan colors and sure enough it has the same kinda cool look. All it needs is a little detail in the face and shoes and it could totally work on it's own. 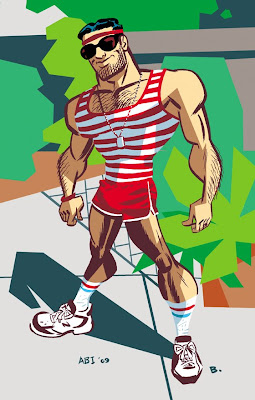 And finally, the piece as I'd intended it. I love the shirt and socks. The single blue stripe on each sock is almost reflected in the blue shadows of Alan's shirt and the metal dog tag.

Toronto Pride is nearly here! I was asked to draw the cover (THE COVER) to Toronto's Pride Guide this year! Holy SOCKS!! I was thrilled beyond words to get such an awesome opportunity! Wow! Getting a gig like that usually stifles the heck out of me...but I just tried to relax and draw what I'd want to look at when flipping through a booklet to find the events of the day! Something busy so you can spend some time staring at it while waiting for a drag show to start (c'mon girls, how long does it take to get ready ;) but not too busy that it's a mess when seen from a distance. I hope I succeeded. I'll post the final image next week, after the guide comes out in tomorrow's Xtra!

Great drawing! I love how you showed the different stages of it. The look on the face and the shadowing in the legs really caught my eye here. It's fun to know that anyone could end up in your drawings!

Congrats on doing the cover for the Toronto Pride Guide. Looking forward to seeing that when you post it!

Terrific outfit and nice drawing! Yep, you only have to wear a heavily big striped shirt to have some comments like "where's your boat" "hello salor" from guys etc...
I had one tee shirt like that in blue, but not anymore. Ihave to buy a new one, except that I look more like tha captain now than a sailor :p
Did I mention that Alan was cute ?

Great graphic! It's always intriguing to see the progression of your works. Every time I see things I like in the different phases. For me you could have stopped at the line art. I like the combination of the red and black. It gives the stud a rougher look accenting his beard and chest hair and his sculpted torso is defined and broaden by the conturing lines of the tank top. Plus, it gives a better feel for the size and heft of his package. Don't you find where sizable, hefty packages are concerned a better feel is always a plus?

P.S.: Nice touch that his cross trainers have the New Balance detailing

This is an amazing drawing, J - The colored line art was a really great touch, and the background works perfectly!

Hey, I am a great fan. I found your blog last month and have went all the way from current to the begin. You inspire me greatly, sir, and that is saying a lot. I would greatly appreciate it if you would take a look a my blog Heroinourtown and offer me some insight. Please.

Any words of wisdom would be greatly appreciated. Also, I am not happy with the color choices I have made with Our Hero's custom. What do you think? If you stop by, of course.

I would greatly appreciate it.

Just bought Loin tights 5 from ly local "comic" shop in Lyon (France) today. It's great to see your batman and Swallow story.
Werte you in the others issues of Lovi in tights as well?

Jeff - It's true. I'm all over the net sometimes and I never know when inspiration will hit! I'll be posting the Pride cover soon. It's out now and I'm excited about it!

Xavier - Alan is, indeed, cute. I've been meaning to draw him for a while now. He always takes such gorgeous pictures of himself. Happily for us he's often in very little clothing :)

Musclsvg - As an admirer of hefty packages I do agree with you. However, sometimes I have to suppress my own needs for the sake of the art ;)

Forge - Thanks, man. I'm always glad to have new people on the blog. I'll be sure to check out your blog when I get a chance. As for words of wisdom...I'll do my best :)

Xavier - That's awesome! I actually have a story in every issue of Love In Tights that has an Andi Watson cover (there were four seasonal theme covers). I think that's all but I'd have to check my own files to be sure.