Toronto Pride! The Day After! 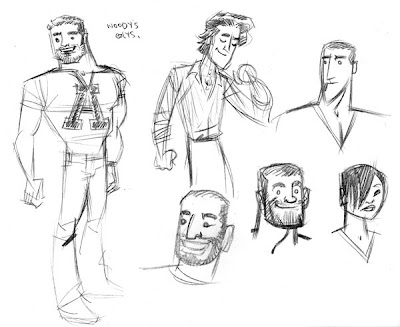 As I mentioned before, this weekend was Toronto's Big Pride Weekend! It was all laughter and tears, sunshine and rain, hotties and more hotties! Typical Pride! I took quite a few pictures of some very inspiring men...who I will endeavour to draw over the next few days. Above is a sketch page I drew up after hanging out at Woody's on Thursday night.

One guy in particular, the fell in the "A" shirt, was absolute perfection! I saw him as he entered the bar with his friends...but didn't see him for the rest of the night. I tried to take a quick mental picture so I'd be able to draw him later. I wasn't entirely successful. Most likely he's an out of towner so my chances of seeing him again are slim.

Or so thought I!

On Sunday it rained. Poured! Just sopping, cold, icky rain first thing in the morning right up until after lunch. The parade was scheduled to start at 2pm and I knew it would still be going on. A little rain has never stopped Pride in the past. I grabbed my dollar store umbrella and headed over to the parade route to find a spot. All the wetness was keeping the crowd numbers down so it was easy to find many open areas along the street. After ruling out a few spots due to rudeness (a chair gently but firmly being pushed into the backs of my legs to let me know that someone wanted to SIT right up at the cattle fence...so I left her to it), smokers and trumpet players I settled on a quietish spot with regular folk. In fact the guys in front of me were speaking in American Sign Language so I knew they weren't gonna be loud and obnoxious!

And whom should I spot standing up against the guard rail with his friends...hot "A" shirt from the bar! Gadzooks, what luck! His boyfriend joined a little later and I was treated to TWO hot guys smooching and dancing to the parade music! *sigh*

Needless to say you will be seeing drawings of them. Again, I wished for the nerve to speak to them but still lack the courage or words to introduce myself without appearing crazy!

Oh yeah, as for the rain? It stopped just as the parade began. The sky remained clear and even let a little sun shine through for the entire parade. I don't know what more proof you need that Mother Nature loves her gays! 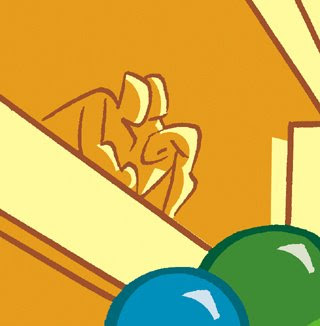 Here's the close-up of the balcony dudes from my Pride Guide cover, as requested by Javier.