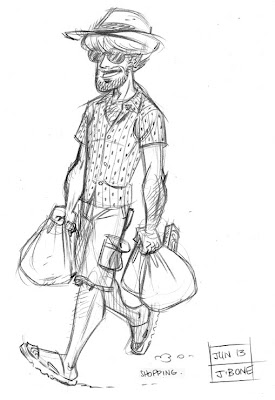 Another real guy I saw the other day. This also happens to look an awful lot like a caricature of me. But I swear I have not intentionally drawn myself as one of the Guy a Day guys! 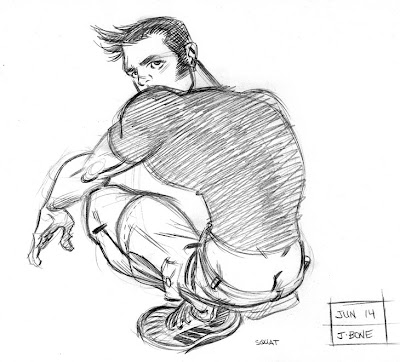 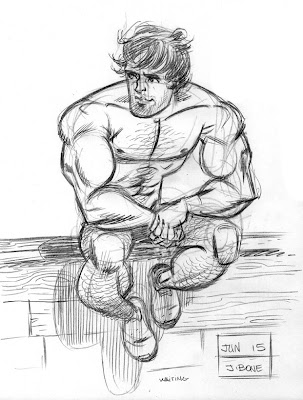 What, no Monday? Sorry...I've got a bunch of work to do today and have yet to get a chance to draw Monday's. I thought you guys would rather an earlier update with one guy short than to have to wait until later in the day for an update. Monday might have to wait until Thursday's post.
Thanks to Lyle Masaki over at http://www.afterelton.com/ for guiding fellas over to my blog. Lyle's mentioned me a few times in his columns. I've met Lyle (if he's the same Lyle Masaki, and I believe he is)...it was very early in my comics career...at the Chicago-Con, I think. Nice guy and I remember disappointing him with my Fruitbat and Swallow story in Love In Tights. He felt it had too many sexual innuendos and compared to the light hearted and more romantic stories that appeared in Love In Tights, he was right. I was a little embarrassed at that and have really tried to show more humour in my art than "sex".
Back to work!
j.
Posted by j. at 12:15 PM

Well I for one LOVE Fruitbat and Swallow, but I understand what he meant. "Squat"'s my new fave, but I love all your work. Thanks!

Will you be doing anything in "honor" of California legalizing gay marriage on Tuesday?

That middle guy is gorgeous. But you know I like the Colossus type. ;)

Javier - I'll leave that to a Califronia artist. We've been marrying in Canada for some time now.

Pseudoparalelismo - My thanks to you.

Andrew - Indeed. The big, beefy innocent type is kind of a fave of mine, too.

Troisnuances - Dude, your own drawings at your blog are fantastic. I love your line work and imagination.

That beautiful… enchant to me… I must spend more times this way.
Thanks