Teepee or not Teepee! or You Loin a new Thong Every Day! 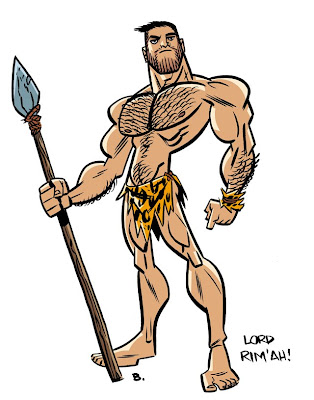 It's Thursday! Officially "Loincloth Thursday"! Today we celebrate all things Loin-y. Looser than a speedo but more revealing than track pants, the Loin cloth is loved for its nearly-naked, not-quite-clothing, almost-revealing-it-all qualities. Popularized by the many incarnations of that famous King of the Jungle, Tarzan, the loincloth is the ultimate in comfort clothing. Won't bind or pull. Doesn't bunch up like boxers. It allows the freedom of "commando" with slightly more protection!
In celebration of Loincloth Thursday I'll share with you my own loincloth story. I don't remember how old I was...possibly eleven-ish?? My dad has always been into hunting and fishing. My parents took us to a hunting club; a huge wooded area where people had set up tents, there was a lodge with a giant dining hall (giant at least to my young eyes). Roasting on a tremendous outdoor spit was a bison! I remember clearly that it was most definitely a cut of meat I'd not yet eaten, and that I wasn't even sure what a bison was but that it was most definitely bigger than a cow. I believe there were several smaller spits with pig, cow and deer. All slowly roasting for the big feast to come.
What fascinated us kids was that someone had built an actual teepee (forgive me if that's not the PC term used today). A real actual teepee with wooden logs as it's support beams, animal hide stitched together for covering and a fire burning right up the middle. The guy who lived in it, out there on the hunting grounds, was an older (late 40's maybe early 50's) gentleman with a greying beard, grizzly Adams friendliness and wearing an honest to goodness leather loincloth. I'm sure I'd never seen anyone outside of the tv wearing a loincloth and I couldn't stop staring. He also wore leather chaps to cover his legs which only seemed to frame that loincloth.
What does he do when the wind blows? Has he different loincloths for all types of weather? What does he wear in the winter? Is it legal to walk around in a loincloth? Where do you buy loincloths?
This kindly fellow saw us kids admiring his teepee and invited our family inside. It was large enough to hold us all with plenty of room to spare. We squatted around the fire (Is it too cold to sit on the ground in a loincloth?) and he told us all about making the teepee and how you put the fire in the middle so that the shape of the cone makes a natural chimney. The whole time he was talking I'm pretty sure I was trying to figure out that loincloth. He had on some sort of leather underwear so as not to be bared to the world...but I distinctly remember that it didn't cover his butt! I wonder now if my staring was obvious. I was a kid so I'm sure it was.
My parents thanked him for showing us the teepee, we toured more of the club and then ate a huge meal of spit-roasted meats and, I'm sure, some pot-luck style variety of other dishes. I kept looking for that loincloth guy afterwards but we didn't see him in the dining lodge. I like to think he sat, cross legged with his loyal dog by his side; eating a leg of bison with no utensils, no barbecue sauce or salt. Just roasted smoky charred meat. He'd toss the rest to his dog when he was finished, then lay back and watch the stars appear in the sky through the hole in the top of his teepee.
Happy Loincloth Thursday!
j.
p.s. The drawing? Oh yeah. The drawing is ol' Josh as a Tarzan type. I've always wanted to do a jungle series and now I've got a fantastically fun character in Rim'Ah. He'll be joined by a chimpanzee, naturally, though not in the typical "Cheetah/Tarzan" relationship. Fear not fans of loinclothery, Rim'Ah shall return!
Posted by j. at 7:04 AM

WOWZERS! Great loincloth story, and even better drawing!! Looking forward to seeing what kind of chimp this guy hangs with, too!

The only loin cloths I ever see are at the leather bars... and even then it's more like a thong or jockstrap.

It is a bit bizarre to me to think that all the parents there were cool with their kids hanging around while "butt-man" is only a few feet away. But then again that's probably just my Catholic upbringing haunting me. ;)

"You loin a new thong every day." Hahaha. You're so funny, JB.

And in case you hadn't heard, there's a SEQUEL to Hawk the Slayer. I can't even imagine what studio exec approved that.

More than worth the wait! Lord Rim'ah is fantastic. He also passes the loincloth acid test: Is the stud hot enough that you want a further glimpse of what's under the front flap? It's great that he has the same feel as Jett Vector and Roger Rogers. A series with Rim'ah would be great. If you're looking for characters I've an idea. A while back I saw a drawing by Harry Bush entitled something like "Tarzan Finds a Boy". In it the apeman has come upon a young male of 18 or 19 years old. Both are almost wearing loincloths. The combination of the hunky jungle lord and the young stud with his freshly muscled physique was very erotic. I remember thinking at the time that it would be great to see the two beefy, barely cover junglemen up to their _ _ _ _ _ in trouble.

Once again, terrific drawing. Thursdays will never be the same again. You've created a perfect alter ego for Josh. It's always great to find a hot, hairy hunk practically naked with a long spear. Uumgowaa Bone!

Andy - Funny, I was going to comment that of all the fetish wear I don't see loincloths in bars. There is no "Loincloth Night" that I know of. I suppose you could just wear one to an underwear party.
I wonder if my parents were maybe a little awkward around the nearly naked man...I most likely didn't notice :) But was his bared buttock any stranger than having kids around guns, open fire pits or cole slaw?

Grapestain - I surprise even my self with my genius! And I imagine the sequel was approved by the same exec who green-lit the first Hawk the Slayer. I want more Hundra! Then again...perhaps it's best to just leave it at one good one rather than dilute it.

Musclsvg - Very pleased to hear it! There will most definitely be Rim'Ah stories. I've already started writing his name "Rimah" wihout the apostropher. I always make those apostrophe'e names and then curse myself when I have to shift/side-stroke every time I want to type the character's name. It's obnoxious. I think it still has the same...innuendo (there's a pun there. You don't have to look very hard for it, either).

There'll be plenty of beefcake in Rimah stories. Most provided by the Lord of the Jungle himself. The rest by the world he inhabits. And the Chimp is more or less a regular old chimp... with a slightly odd personality. You'll just have to wait for the first story to see what I mean.

Hi. Long time lurker, first time commenting: I really like these Josh-themed drawings/pictures, especially the one from your Just Joshing post. You've got such a great style and give such life to the faces of your men.


P.S. I hope you don't mind, but I've linked to this blog and used your Josh Hockey sketch to entice people to come and have a look here. I'll take the pic down if you do. Thanks.

Inexplicable DeVice - Many thanks for commenting. All comments, especially complimentary, are very welcome. Thank you also for linking to my blog. Very happy to read you're enjoying the Josh drawings.

Dunno why, but I guess I am a bit of a loincloth purist.

To me they should be brown.

Something about the leopard/cheetah fur looks costume-ish to me. I know that the Marvel Tarzan had a leopard skin lioncloth, so did Buster Crabbe, but still...

Javier - I was beginning to wonder what had become of you. I know not all posts are to everyone's tastes but it'd been a while since we'd heard from you. Happy to hear from you again :)

I agree, the leopard print looks costumey. I was looking at Sheena comics (and there is actually a female jungle character called "Rima" which is where I cribbed the name). But not necessarily costumey in a bad way...

My feeling is that the lighter colored loincloth gives the wearer the appearance of being naked. The tan of the cloth could almost be mistaken for human flesh color.

I think Rimah most likely has a loincloth for every occasion...including a few dark brown cloths.

I've got a real nice plain brown "lil' indian" loin cloth, but it sure doesn't cover much, man - you just gotta free-ball under it! I will wear it next time J. We gotta keep your fan base happy right?

Seriously, isn't it just great to see a stud in a loincloth? Especially one as hot as Josh. My feeling is that the garment was probably fashioned from a wild animal he killed. A token of conquest. Maybe a pose with Josh in his plain brown "lil Indian" loincloth can be the next in "The Week of Loincloths". Can't wait to see the first story with Lord Rim'Ah. I don't mean to sound impatient, but WHEN?!?!?!?

P.S.: Attention Javier: Don't look a gift horse hung in the mouth. Josh would still look smokin' hot if the loincloth were pink polka dotted on a field of mustard yellow and lime green strips!

Musclsvg - Good question. I thought I'd have time this very week...and then I went and picked up a weeks worth of work. I've got three stories plotted out. All I need is time to draw them.

p.s. Hey Josh, stop taunting the locals! You're working them up into a frenzy!!