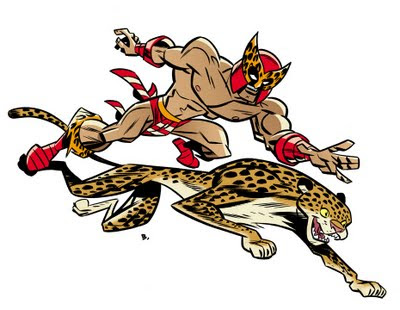 B'WANA BEAST! Introduced to me by the same friend who reminded me about Red-Wolf (see previous Loin Post), I kinda fell in love with B'Wana Beast myself. He's one of my buddy's favorites. Considering the fact that he's not wearing much of a costume he shows up in some unlikely places. Like in the Justice League Animated comic book, the Justice League tv show (and action figure line) as well as the new Batman: Brave and the Bold. I've drawn him for my blog, even!

Apparently he's had a name change in these more politically nervous times. But I looked up B'Wana, assuming it had some horribly negative meaning, and found that it's a form of respectful address in parts of Africa. His new name is 'Freedom Beast' which is an incredibly stupid name. How about 'Sir Beast' or 'Gentleman Beast' if you have to change the poor guy's name.

Great as always...but why is he chasing the mascot of the Jacksonville Jaguars? ;-)

Johnny B - Are the Jacksonville Jaguars some sort of a sport team? I'm completely unfamiliar with sport teams. Thanks, though! :)

C.Edwards - Yeah. I dunno where it came from. I didn't read all of B'Wana's wikipedia entry to get the full scoop.

Hot things come to those who wait. I remember the last time we saw B'wana Beast he was relaxing in the bough of a tree while munching on some tropical produce. I said it would be great to see him in an action pose. Boy!!, did you deliver. The man/beast and his feline sidekick are terrific! Like you, I can't see him called anything but B'wana Beast. A stud by any other name would look as hot, but why mess with a good thing? I like that his wardrobe(what there is of it) seems to be Marvel Comic meets ancient Eygpt. Great job Bone!!! As far as I'm concerned you're B'wana Best!

Musclsvg - Many thanks! "B'wana Best" is a title I will proudly wear :)

Freedom Beast is actually the name of his African successor. He was recently killed off. The original B'wana Beast retired a while ago. He might have been killed off too, I think.

But let's just pretend he lives on thanks to JLU...

Jason - Thanks for the info. I agree...let's go with JLU continuity and pretend the other never happened (I like to pretend that a lot with many comic book stories).

Never heard of this one. I really liked the crazyness in the eyes of his jaguar!

Freedom Beast is pretty weak. It sounds like one of those stupid Republican ideas like "freedom fries" or "Freedomworks".
I grabbed an old Showcase back issue with B'Wana when I was really young but never thought much of him until I saw him on Justice League Unlimited. That boy could move!