The Loin Age of Marvel Comics! 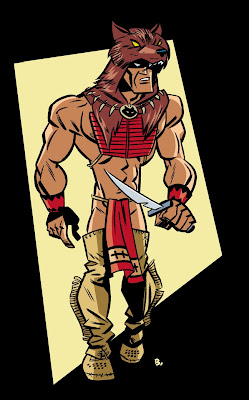 I first saw this character in the form of the very cool Randy Bowen mini-bust (which I confess I now wish to own). I'd forgotten about him but when I was telling a friend, who has a vast knowledge of all Marvel characters especially the obscure, that I was finally doing a weeks worth of loin-cloth themed drawings he suggested drawing Red-Wolf. I changed his costume slightly, making the 'pants' something more like chaps, or hip waders. A change I'm sure most of you won't fault me for making, I'm sure.

Fantastic Bone!!! Red Wolf is a terrific subject to start The Week of Lioncloths. The graphic is great with one of the best physiques ever. It's very hot the way you lead the viewer's gaze from the eyes in the wolf head to the stud's eyes in shadow to the nipples on the flaring pecs that are just visible on either side of the chestpiece. The fact that the breechcloth is not apron flat gives it more movement and a better glimpse of Red Wolf's sexily drawn loins. I'm not familiar with the backstory of the character, but the only thing better would be if he wakes up totally naked after a night with a full moon. Let me just say excellent job and "OOWWwwooOOO!".

Johnny B - Only 9 issues, eh? That should make it easy to collect. Thanks, Johnny B!

Can we submit to you others marvel/Dc characters wearing a lioncloth to you?

I'd love to see this costume in motion!
I remember reading a Tigra comic when I was really young that guest-starred Red Wolf. I loved him then and I love him now even more!

Sooo hot! Love the change to the pants, (wish I'd thought of that when I draw him recently!) The Tigra comic that guest stars Red-Wolf (mentioned by R) is a classic J, you should look it up!

If you want to see more pics of Red Wolf please go to the following site:

It lists other comics characters. You may wish to look up Black Crow. Another Marvel Native American character.

I made a RedWolf-styled Gorilla costume for burning man this year, based from your ink. Giant head, breastplate, teeth, sword, armbands, loincloth, leggings. I'm glad you use your powers for good. If you could only draw my shoulders larger in real life.

Had i ever seen the original Red Wolf beforehand, the gorilla head might have been way smaller, so thanks for the Bonequese exaggerations.

men is a real shame to get lose this kind of character, OK maybe he is not the better super hero in the marvel universe, but only one appear, almost I can tell you that, this character was put it on the side for the only reason he is a descendant of viagra online.