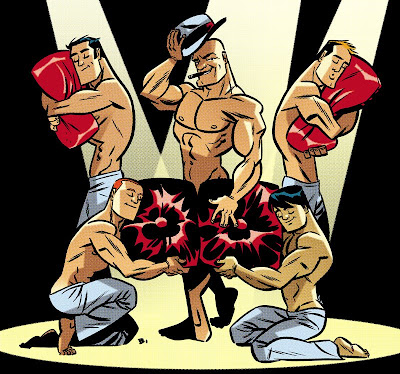 Another image of Hot Toddy...from his second act on the third night of the Toronto Burlesque Festival. He started in pajamas, hat and cigar with the boys alternating pillow coverage as he danced and removed pjs. A little flash of bum, and he was hidden again. The final bit had the boys holding up all four pillows as the pajama bottoms were kicked off, then Todd pushed back the two top pillows and cheekily tossed out a smile and chomped on his cigar! It was fantastic!!

What's this, you ask? Why it's an announcement of sorts. Five little boxes. Five days in a work-week. Whatever could it mean?

Check in on Monday for the answer and then each day thereafter for an update EVERY DAY! Zounds!

Hot Toddy must be quite the showman to retain focus while surrounded by so many hot bodies. That's a lot of eye candy.

P.S.: Can we look forward to more of you in upcoming graphics? The last one of you and Jett was terrific!

Musclsvg - And showman he is! Seriously...there was one pillow boy in particular that I found fetching but, really, your attention was always drawn to Toddy!

In answer to your query; all I'll say is "Monday".

As I am neither beefy, nor cake you won't see me very often. But thank you for the flattery :)

Wow, I can't wait for Monday! What a tease:)

Hey guy! I'm the pillowboy on the top left and I'm tickled pink that you illustrated this scene.
The Boylesque boys love it! Have you sent it to Hot Toddy?

Connor - Hey man! That was a great night, and a great performance. Nicely done! Toddy has seen the drawing and we've talked about me doing more of him. I've been busy lately with work but hope to get back to drawing more of Toddy for sure!

Glad to hear you and the boys like the drawing! :)